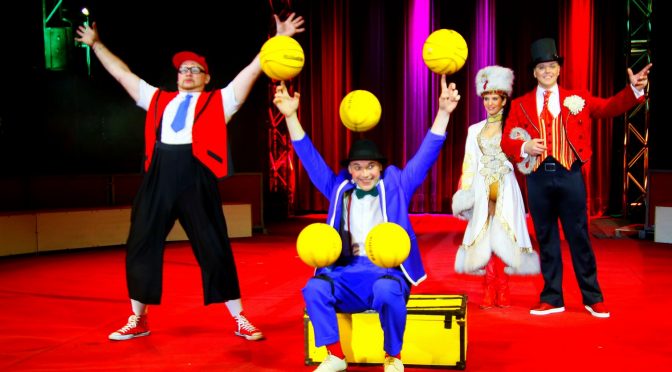 To create this extravaganza producer Andrew Guild spent eight months seeking out and signing up the most entertaining acts on the international circus circuit. This show boasts artists coming from Canada, Turkey, Cuba, USA, Colombia, Russia and a jaw dropping contortionist from  Dagestan. Prior to arriving in Sydney for its premiere season, ZIRK! toured South Africa and  Singapore garnering rapturous reviews.

Eschewing animal acts, this cavalcade of circus stars create eighteen action packed acts and in some cases death defying performances without a net! These include athletic trampolinists, juggling clowns, aerialists, and a motorbike globe with a record breaking seven riders hurtling around at thrilling and dangerous speeds.

To house this striking show a brand new tent made in Italy has been brought to Australia to accommodate 1450 spectators.

To further complicate an already complex show the apparatus used by some of the artists had to be shipped in from such places as Germany and Canada.

Sydney seems to have an appetite for circus acts large and small and this large and dramatic production has been extended by a week.

ZIRK! will light up the Show Ring at the Entertainment Quarter, Moore Park until 21 July. Much of the circus’ run coincides with the winter school holidays and would make perfect family entertainment. After its Sydney season The Big Top Spectacular will tour Brisbane, Melbourne and Canberra.