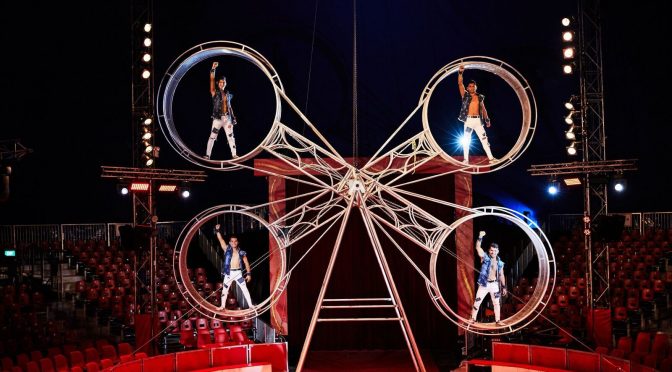 Sydney has fallen under the spell of ZIRK! CIRCUS – The Big Top Spectacular and due to huge demand, the season has been extended by an additional two weeks. The Sydney premiere season will now continue through to 11 August and no further extensions are possible. A brand-new global experience which thrilled audiences in South Africa and Singapore and had critics raving, ZIRK! CIRCUS is playing in a huge brand new Big Top in the Showring, Entertainment Quarter, Moore Park until 11 August.

Eighteen awesome circus acts, all in Australia for the first time, feature in ZIRK! CIRCUS – The Big Top Spectacular. The best Russian acts are joined by gravity-defying, death-cheating, thrilling and spectacular circus stars from Cuba, Canada, the USA, Colombia and even a weird and wonderous contortionist from Dagestan. An awesome trampolinist, a jaw-dropping double, double wheel, a Russian master clown, a motorbike globe with a record-breaking seven riders hurtling around at breakneck speed, a Ringmaster who’s starred with America’s Ringling Brother Circus, and many more combine for ZIRK! CIRCUS. The show contains no animal acts.

“An absolutely stunning montage of skill, precision, dedication, and thrill-seeking that pays homage to the history and tradition of circus, whilst still maintaining relevance with a modern twist” – Theatre Travelss

“5 star show … It’s happening now before your eyes, and not on your device. Go see!!!” – Theatre Now

For more about ZIRK! CIRCUS Extended Again Till 11th of August!, visit https://www.zirk.com.au/
Find us on: YouTube | Facebook