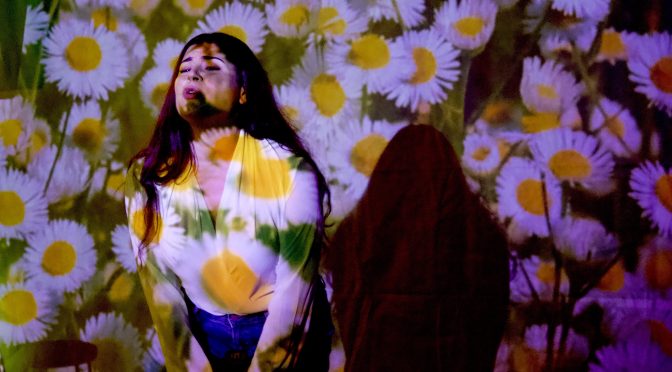 In the Sydney premiere of YOURS THE FACE by LZA Theatre the audience watches a video installation projected on an actor and the backdrop pinned by large photographic lights, currently on in the Blood Moon Theatre, Bayswater Road, Kings Cross.

Daniela Haddad sustains an hour-long solo duologue story about a photograph by a male Australian photographer of a female American model meeting in London. The strong accents and colloquialisms readily separate the characters and readily lead to audience laughter. The model Emmy as well as the photographer Peter are a long way from home. -a long way from mother figures and their traditional values.

Director Liz Arday recognized that in the wake of Me Too and Time’s Up it would be more relevant to use a female actor and the female voice as a focus. The original Melbourne production in 2014-2015 utilised a male performer in the solo role

Melbourne based playwright Fleur Kilpatrick used her own experiences as a model, to successfully convey the image of the model as “a prop for someone else’s art”. Though one suspects that the photographer’s art is often concentrated more on power and seduction. By rolling the relationship into one performer, the playwright has somatised the perspective that they are both locked together in this tight industry. Both are shown to have had body-image problems throughout their lives and been rejected and distanced for their bodies, whether thin, fat, or ultimately ‘beautiful’. Ownership and idolisation are reflected in the script, whilst the actor wears casual non-sexy attire.

Fleur Kilpatrick is a prolific Melbourne-based writer and director with post graduate qualifications in directing and performance writing. She is artistic director of Quiet Little Fox.

Liz Arday is a Sydney based director and producer. She is the 2018 recipient of the Sandra Bates Director’s Award and is Artistic Director of LZA Theatre. She has worked extensively in Australia and the UK as a director and assistant

Daniela Haddad graduated from the Academy of Film, Theatre and Television in Sydney. She has refined her techniques and improvisation through teaching high school students Theatresports. This is a useful background for her role here as Peter seducing Emmy, a young model.

Lana Morgan, the Assistant Director is a Sydney-based actor, writer and PhD student. She has researched fairytale and feminist theatre practice and has worked professionally since 2009 with developing new Australian theatre as well as with classical works.

Liam O’Keefe is a freelance lighting designer and technician based in Sydney with a wide variey of work in theatre and Handa Operas on Sydney Harbour.

Bridget-Rose Dutoit as stage manager and operator is a recent graduate with a collaborative approach.

The video projection on the actor helps to objectify the person. The changing scenes and style from realism to abstract help to keep the audience engaged in the current moment. The minimalist soundtrack is not intrusive.

As an audience we watched the photograph being taken, we were there at the seduction, the eliciting of consent and the outcome of the photo-fashion lifestyle. We were seduced by the excitement of being overseas and faking success. We participated as onlookers.
Definitely a successful shoot, strongly scripted, acted and staged.

YOURS THE FACE ,  LZA Theatre [Facebook] is running until 12th May 2018 Tuesday to Saturday 7pm at Blood Moon Theatre, 24 Bayswater Road, Kings Cross.