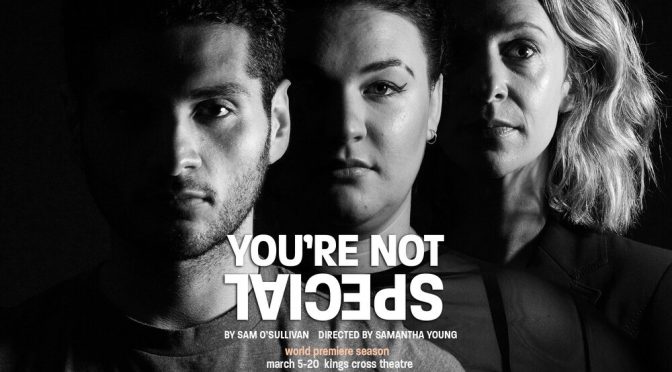 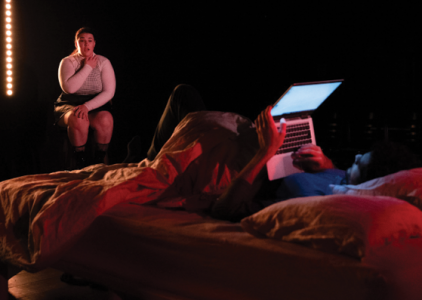 YOU’RE NOT SPECIAL may seem a strange title for a play in an age where we are told we are all special.

But as one character points out, to call someone “one in a million” when you consider the population of the earth, it really means you’re still like thousands of others – nothing special, nothing unique.

The play begins in a dog park where Dan meets April-May. He’s an illustrator working from home, she is a dog walker, a job that is paying her tertiary course to become a secondary school teacher. With one hand she bowls balls to Graham, the German Shepherd. With the other she holds a copy of Carmen Maria Machado’s book of short stories, Her Body & Other Parties.

Like Machado’s stories, Sam O’Sullivan’s script is socially astute, elliptical and never quite plays out how you might expect. In Machado’s view, stories can sense happiness and snuff it out like a candle. O’Sullivan certainly concurs.

Dan has recently moved in with Ellie and they are happy. Assembling an Ikea bed goes without a hitch. She has only one rule and that is that laptops, indeed all sorts of screens are banned from the bedroom. But a new job causes her to eventually break that rule, and soon, both are irrevocably caught in the technology trap.

YOU’RE NOT SPECIAL is an intriguingly layered story about the pervasive power of the digital portal, and how our existence in the modern age can be overwhelmed by the internet – communication, community and commodification.

At its most insidious, it is an observation of the Tetris effect, illustrated by Dan devoting so much time and attention to a virtual activity that fantasy begins to pattern reality, an addiction that disables real and genuine human contact.

There are dark matters at play in YOU’RE NOT SPECIAL but O’Sullivan has the wit and the skill to leaven the drama with laughter, an ingredient that is liberally employed, both heightening the happiness and the coruscating counterpoint. 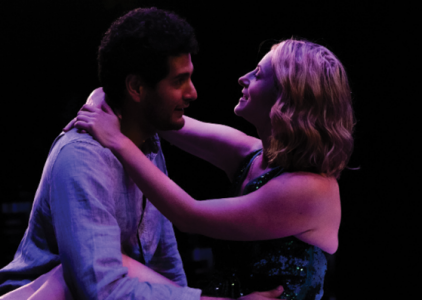 Kate Skinner sizzles as Ellie, an advocate for an advertising agency, in love with her new man and her new job, effervescent in boardroom and bedroom, until the evanescence of twenty-four seven as opposed to nine-to-five in the workplace combines with Dan’s detachment to cast a pall over her life.

Ariadne Sgouros as April-May is marvellously enigmatic as both cyber cipher and flesh and blood antagonist.

And Arkia Ashraf as Dan making a remarkable debut on the Sydney stage having recently graduated from the Actors Centre.

Elegantly and energetically directed by Samantha Young, YOU’RE NOT SPECIAL is a meditation on love and human connection – tender, poignant, painful, funny and sad – from one of the most original voices in Australian theatre.