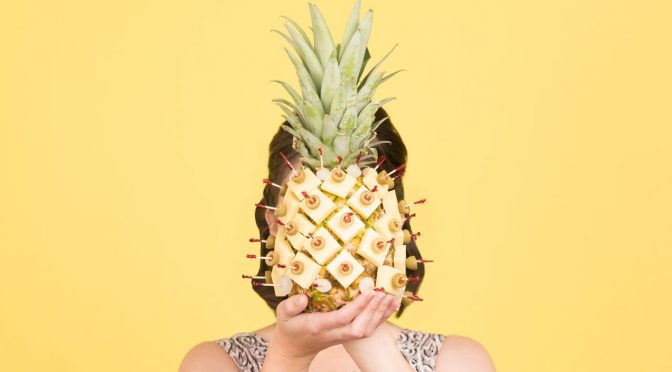 Q Theatre is taking audiences on a journey back to Sydney’s early modernist art movement in their new work YELLOW YELLOW SOMETIMES BLUE.

YELLOW YELLOW SOMETIMES BLUE is the story of Iris and Leo, two outsiders peeking in at a world of money, power and gossip as they prepare canapés and cocktails for a debaucherous gathering of Sydney’s cultural elite at the home of Gerald and Margo Lewers.

Inspired by the history of Penrith Regional Gallery & The Lewers Bequest, the new work traces the roots of Sydney’s early Modernist thinking and offers a fresh take on Emu Plains in the 1950s.

We had the opportunity to speak with the playwright, Noëlle Janaczewska.

SAG:      It’s so nice to speak with you. I gather you are knee deep in rehearsals. Is that how you like to work, to be in close at the rehearsals?

Noëlle: I think most playwrights like to be involved in the rehearsals of a new play, a new work especially, to some degree. So, yes, actually I’ve been going in each week to see where they’re up to.

SAG:      This is the question I ask every playwright I speak to: how does it feel when your play gets taken by others for the first time, when it’s given into the hands of the director and cast?

Noëlle:    Well that’s the nature of play writing I guess. If I want to completely close in then I am writing poetry and prose but play writing is a collaborative form. So the script is only the first part of making a piece of theatre and you have to allow space in that play for your collaborators to have their input: the directors, the designers, obviously the performers, a musician or composer.

So it’s actually exciting when you see other people come into it because they discover things, will see things, that perhaps I haven’t even seen myself or offer a different perspective, so it’s exciting. I’m always a bit anxious but mostly excited.

SAG:      You mentioned the music there and this production has a cellist.  Was that always in the mix for you?

Noëlle:    It wasn’t in the very in the beginning but if I’d known that was a possibility, I would have.  Because I really like writing performance that has music as an integral component. But for all for budget reasons that often has to get scaled back but in this one we got a fabulous composer and she is part of the performance. So instead of being a two-hander it becomes a trio between the two actors and the musician.

So the actors (Adam Booth and Kate Worsley) have been rehearsing all the time with the cellist and composer (Me-Lee Hay) which is fantastic to have the music not just brought in right at the end, but to have the artist in the rehearsal room responding to what’s happening on stage and trying out drafts and compositions.

Sag:        So who are the actors portraying? The pre-media speaks about viewing events through the eyes of “the help”, so the two characters are not Gerald and Margo Lewers?

Noëlle:     No. This is not a biographical piece.  It’s loosely inspired by the place that is now the Penrith Regional Gallery, that was the Lewers’ homestead on the banks of the Nepean River River at Emu Plains. So it’s not biographical in any sense.

The two characters are fictional characters, fictional events and characters. Apparently the Lewers had very great parties with lots of people, lots of artists and critics, and lots of people came to them and they were very lively and went on for a long time.  So Nick (Nick Atkins), the director and I, found it really interesting. So the play is set over the course of an evening and the party is going on off stage and in the kitchen is Iris and Leo.

SAG:      And the brief was to respond to the gallery and its history?

SAG:     I think my own sense of what Modernism might be a pretty European view.

Noëlle:   (Laughs)  You might need an art historian for that! Modernism might have started with events in the early 20th century with the shift of wanting art to represent the complexities of the time and to move away from, I suppose, more representational, more narrowly representational, forms.  Conventional still lives or portraits or landscapes.

SAG:      I’m wondering if Modernism will represented somehow in the production.

Noëlle:   Well it’s not a naturalistic piece.  It does have elements of what we might consider naturalistic production but it also takes off and goes into other areas, it jumps about a bit. So there’s elements of that in the structure of the piece, but it is grounded in two characters in the kitchen, over one night, preparing the food.

Noëlle:   When I was thinking about titles I looked at some of Margo Lewers paintings to see whether there was a title there. There is a painting called ‘Abstract in Yellow’ and another one I think it’s called ‘Composition in Blue’ and those colours stayed with me.

And they are kind of a polarity.  Yellow is a happy colour, I read somewhere that Van Gogh used yellow paint in the hope it would make him happy. And blue, you know, has this connotation of melancholy, so that is contrasting. But it also could’ve been a title from one of Margo Lewers paintings pushed slightly poetically. She had poetical and quite practical titles and a colour often featured in them.

SAG:      You must’ve had to do a lot of research, what did you find most interesting?

Noëlle:    Yes, I did read things about Modernism in Australia around that period and a lot of art history work. But what I found very interesting was that Australian social mores were changing in the mid-20th century especially around culture, ethnicity, gender and sexuality. There is both continuity and change. There’s waves of migrants from Central Europe, not England or Ireland, and yet at the same time women’s position is still very domestic on the home front.

SAG:      I’m sure that will come through in a play set in a kitchen.  Thank you so much for your time, I am very much looking forward to seeing it.

YELLOW YELLOW SOMETIMES BLUE from Q Theatre plays at The Joan, Penrith from Thursday 15 – Saturday 24 November, 2018.  And you can read more about Noëlle Janaczewska at her website.