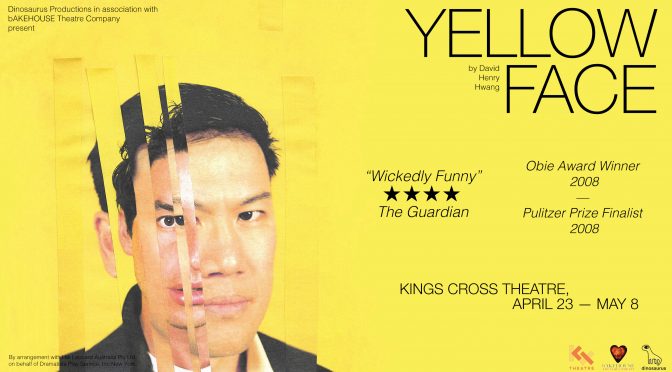 As much as one would like to give unqualified feedback to YELLOW FACE with its explicit themes of race and identity, the nature of race, and self consciousness and appearance, the show itself has an awkwardness that does not do full credit to the potential of the themes it explores.

Let’s be clear, the qualities of this Australian production of a play that has had quite extensive international exposure since its premiere in 2005, is of a high standard. There is much to enjoy in the individual and group contributions of what is a fast paced, two hour long ensemble show, where individual cast members play multiple role over years of the narrative, about the professional life of producer and playwright DHH (Shan-Ree Tan), loosely based on the playwright’s own life.

Starting with protests about casting of Miss Saigon, DHH is involved with several shows involving the long standing phenomenon of “yellow face” – whereby a white performer plays an Asian. Tan plays the key narrator/character role with aplomb and perfect timing, and really pulls the show together with charm that it might otherwise lack. Adam Marks and Idam Sondhi play parts with arresting clarity, entertainment and persuasion. Sondhi plays his vignettes, including the portrayal of Cameron Mackintosh, with truly delightful verve.

Marks plays Marcus G., the bete noire of the show, who succeeds in fooling the Asian community and Americans generally that despite his Jewish/white appearance, he is actually Asian. Marks is totally and delightfully immersed in the merriment, and doesn’t let a bit of ancestral detail get in the way of stage success that culminates in being cast as lead in an Asian production of King and I (“the best casting since Yul Brynner”). What this says about the Asian community, who fall for the deception – or for that matter the autobiographical plausibility of Hwang’s alter ego – are only two of the problems one might have with the script. But the shared accomplishment of the female performers, including Helen Kim, Whitney Richards and Kian Pitman, who constantly delight with quick emotion, and even quicker characters and situations, help override any quirks. Kim is a smiling beacon on stage. (One might wonder whether another Asian female could have been cast.) The two hour ride is a lot of fun and any anomalies can be put aside in a deserving, paced presentation directed in tight variety and colour by Tasnim Hossain.

What is unsettling is the mix of styles and moods in the play itself. It starts as a stand  up comedy with lots of throwaway one liners (many not that funny but made so on the night), framed by mockumentary techniques, which digress into a thoroughly unconvincing farce about DHH casting Marcus G, then opens up into an otherwise convincing dramatic exposition between a New York Times reporter (Kian Pitman) and DHH about the treatment of Chinese Americans, ending with a Woody Allen conversation between the author and his main character, when the whole plot is revealed as fiction. On the way there are a fair number of caricatures- mostly of American celebrities and politicians, but also of main characters. DHH’s fumbling father, HYH, seems quite stereotyped, and one wonders why someone wrongfully, unjustly imprisoned as an American Chinese is the subject of laughter in the play. Johnathan Chan makes a good fist of the HYH despite limitations in the material.

Was this the best way that poignant themes of the play could be developed? Is comic banter required to address on the stage issues that we walk on as eggshells in the real world (it may well be). Should we even be laughing at foibles presented? Of course, the Chinese ethnicity of the play’s author and main character allows latitude and authenticity in its expression and humour, and it is possible there is some cultural sensibility that is partly lost on a wider audience. On the other hand, Steve Martin would have owned and delivered this material, as would, yes, Woody Allen. So it probably does have its precursors.

I am not the first to raise concerns about the script, and probably will not be the last. Having said that the show came at the right time when first presented, and its vaudevillian foray into Chinese American relations, including Chinese Americans, has continuing relevance and yes, importance. The show is welcome for raising issues so boldly. Having pried open issues in an awkward,  wordy manner, one wants more. Is there such a thing as an Asian race (the play in fact asks this)? Why do we allow race to set up boundaries for our individual selves (the play asks that too)? Why do we even use a term like race which has no scientific basis and such a treacherous social etymology (the play does not ask that)? One might want more explanation and answers for the questions raised by the end of the play – but is that really a bad thing?