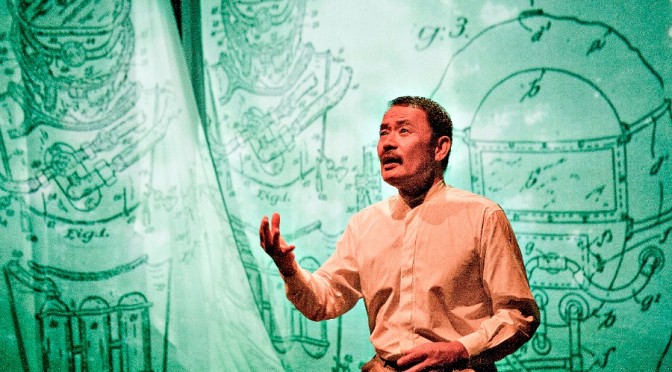 Kanamori contacted Murakami’s family to try and piece his life together. Her starting point was difficult. Murakami’s photographs had gone missing after his internment.

Kanamori’s story is as much about the Japanese who lived in Australia from the gold rush days as it is about one very unique artist. Murakam had extraordinary vision but events conspired against him in the most brutal fashion: he lived his entire life in the tropics, then experienced freezing weather in Tatura, which no doubt contributed to his death.

Kanamori’s story is told through the use of video and photographic projections set to a very authentic  and stirring soundtrack by Terumi Narushima.

Arisa Yura is completely charming portraying Mayu Kanamori as she teases Murakami’s story out. Kanamori is a photographer herself and when she encounters the ghost of Murakami, he admonishes her for her photography ethic and style.

Any photographers in the audience will find this play compelling, as Murakami voices the challenges and contradictions that are all a part of constructing images for posterity. What do photographers choose to reveal, and conceal at the same time?!

Kuni Hashimoto is superb as Murakami, he has a dignified and masterful demeanor that was perfect for the role. Yumi Umiumare plays Murakami’s first wife, Eki, in a video projection, which adds another potent dimension to the story.

YASUKICHI MURAKAMI: THROUGH A DISTANT LENS takes the audience to a time which is scarcely documented in Australia’s history, it is gratifying to know that, thanks in part to Kanamori, Yasukichi Murakami will ultimately be more than a footnote in history.

A Performance 4a and Griffin Theatre Company production, YASUKICHI MURAKAMI- THROUGH A DISTANT LENS is playing the SBW Stables until the 21st February.

Joy Minter’s review was originally published on her website http://www.thebuzzfromsydney.com.