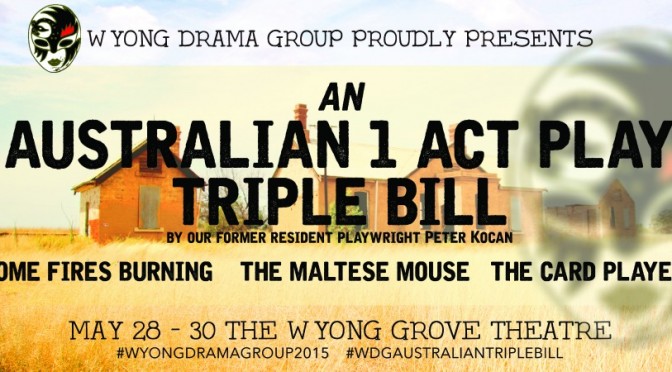 Kocan is a lifetime member of the Company and has for many years challenged and entertained local audiences with his work both as a performer and as a playwright.

From a troubled past as a young man, Kocan went on to complete a Doctorate in Creative Arts from Newcastle University and has also been awarded the Australia Council Writers Emeritus Award for lifetime achievement in Australian literature.

The first play in the trilogy was THE CARD PLAYERS, a lively and challenging piece of theatre, directed by Pollyanna Forshaw.

THE CARD PLAYERS  is set inside the admission office in a mental institution with a motley and tragic collection of patients who have lost their way but within reach of finding it again.

There’s the characters Mummy clad in mummy bandages and a strait jacket, confined to wheel-chair.  Mummy’s confinement in a small padded cell is easy to imagine.

There’s the elderly Aggie who is incontinent and hygienically challenged – her mere appearance on the stage clutching her doll evokes pity mixed with revulsion from the card-playing inmates and the audience.

The issue of homophobic bashing confronts us when the psychiatric nurse bashes an ageing psychologist, Leo the ‘poof’,  to a pulp.

The denial and lies told to cover-up the attack are a stark reminder that mental health institutions were a long way from providing health for mentally ill clients in the seventies.

The second play in the trilogy was a spoof with the intriguing title THE MALTESE MOUSE, directed by Alexandra Travers. This play is an hilarious spoof on the Humphrey Bogart private-eye genre as American gumshoe, Joe Sleazy, attempts to sort out the tribulations of the very English Polkinghorne clan from West Devonshire, in particular Patricia Polkinghorne’s double life.

The blackmailer Sydney Greenback, dressed in a puffy leopard-skin jacket and gaudy jagged green tie wants to spill the goss, or in this case feathers, on genteel Patricia whose alias Fifi, draped in scanties and feathers, has a secret gig at Naughty Nickers Club at Soho. But why is Greenback obsessed with acquiring the Maltese mouse -a figurine from Malta?

Why does Dame Gertrude – Patricia’s not so genteel grandmother- insist that young people have a language all of their own? She puts it down to all that jitter-bugging!

THE MALTESE MOUSE is full of quirky and humorous moments. It is entertaining, even corny, when the Private Eye drops his (brief) case!

The performances were slick the costumes authentic, and the two comfy Empire green and olive velveteen chairs were very at home in the Polkinghorne manor in West Devonshire.

HOME FIRES BURNING was the final play in the trilogy. The opening scene is set in the family kitchen in the mid 1930’s with a popular song from the era  playing, ‘Pack up your troubles in your old kit-bag and smile, smile, smile.’ The melody set the scene and also struck a chord with the more senior members of the audience.

The conversation in the kitchen, with the help of lots of beers, is very lively and soon raises the ire of mum Beryl who threatens to take a strap to her son Bill Harris and his mate Tossa Grimes – best mates inextricably bonded by war in the trenches.  An exasperated mum scolds the two diggers to ‘take care of your scone – it’s what you put your jam on!’

Beryl’s simple sister Lil sits in her flounced muslin collar dress and rocks continuously in a white rocking-chair. Lil fusses over the antics of her imagined cat.  Conversation turns to Lil’s ex-fiance Howard who fled Dubbo after Dad’s heady lecture to him.  Poor Lil cringes in the corner like a trapped possum

The tragic pieces of Tossa’s sweet-heart’s story ended in a ‘Dear John’ letter in the trenches. Mum accuses the men of having skins like 44 Gallon drums!. An emotionally charged debate ensues between Norm and the two diggers on whether the wharfie unionists refused to load hospital ships bound for Belgium. The closing scene features Lil singing ‘Keep your Home Fires Burning.’

HOME FIRES BURNING has been dramatised by Radio ABC and has won several festival awards in NSW.

TRIPLE BILL played at the Wyong Grove Theatre between the 28th and 30th May.