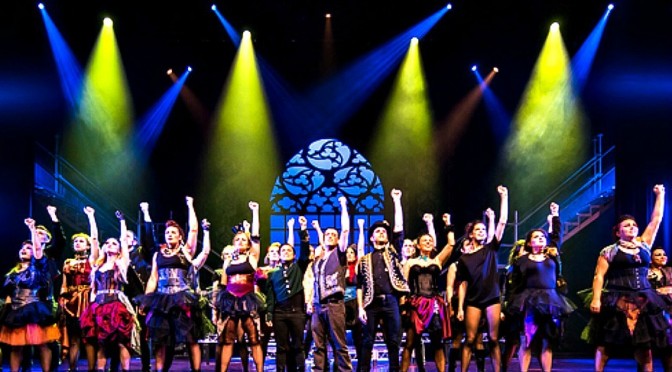 This is a dazzling, superb version of Lloyd Webber and Rice’s rock opera JESUS CHRIST SUPERSTAR that takes one’s breath away.

Willoughby Theatre Company‘s (WTC) revival, directed by Stig Bell is a contemporary reworking of the now classic 1970’s musical that burns , including contemporary choreography,slang and ironic allusions to modern day life that make it as fresh as if it was written yesterday .

In a strong ,powerful piece of theatre , Lloyd Webber and Rice take us through the last week of Jesus’ life and ministry,as based on the Gospels . This includes Palm Sunday ,the Last Supper and end with the events of Good Friday and Mary Magdalene sobbing over Jesus’ inert body.

The cast is excellent featuring magnificent leads and a large, terrific ensemble.

The orchestra as led by Therese Doyle is terrific . From the first hot wail of the electric guitar we are transported to the world of the Gospels and their events.

James Wallis’s lighting design is tremendous , strong and dramatic ( note strobe lighting is used at one point). There is very effective use of silhouettes and swirly patterns, predominately in reds and purples, on the floor and walls.

Slade Branch‘s set is very effective. It is multi-split level in structure with assorted steps and layers and staircases either side. This design is fluid and flexible enough to incorporate everything from the upper room for the Last Supper, Pilate’s offices , Herod’s court, city streets and more.

Darkly handsome Jesus , as portrayed by Dexter Villahermosa , was brilliant. He was in fabulous voice. Jesus is portrayed as a kind of rock God, especially in the opening scenes with the crowds swarming around him to touch him, and girls almost fainting after having touched his hand.

Later we see Jesus drained and exhausted after having healed the demanding sick .He is mostly shown as an ordinary  man deeply in love with Mary Magdalene whilst also having an other worldly quality about himself.

Villahermosa’s ‘Gesthemane’  in Act 2 is a showstopper, with Jesus fighting against but in the end accepting the will of God and his crucifixion scene on the huge metal cross is shattering .

As Judas, Peter Meredith was brilliant,–angry, anguished and menacing. At times he is questioning and mocking. He is torn and driven by something outside of himself in the lead up to events that then spiral out of control.

Mary Magdalene is depicted as Jesus’ accepted partner, popular among the Apostles except for Judas who grumbles mightily. It is interesting to observe that she is the only woman at the last Supper. Lucy Hood is terrific giving a splendid performance. Her ‘I don’t know how to love him’, whilst fast paced and upbeat, was very moving.

Tall, cold, chilling Pilate is shown as dashing in glittering full military uniform and in Act 2 wore a feathered ruff (pleated collar). Gareth Davis’s performance is striking,– his icy lizard-like control is disturbed by strange dreams and Jesus ‘ demeanour but in effect he equivocates. He tries to help but eventually washing his hands of Jesus.

I also liked the three guards in sliver breastplates with smaller ruffs.

The religious leaders, Caphias and others, wear gold chains and are dressed in black and purple robes. Special mention must be made of the performance and the amazing bass voice of James Jonathon in this role.

This Willoughby Theatre Company revival was an enthralling, vibrant and captivating night in the theatre.