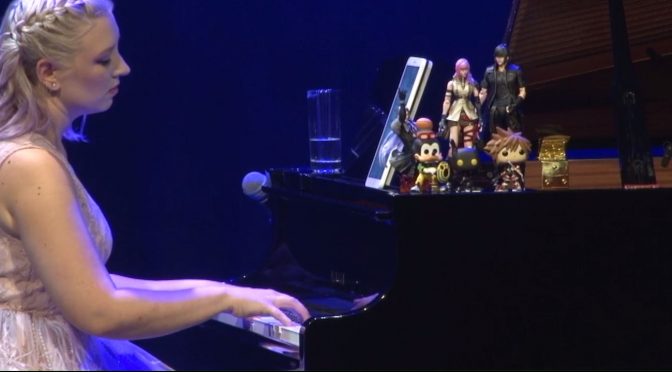 Seating amongst the audience for WORLDS CONNECTED, you quickly will notice that this is not the usual mix of people who might go to the Riverside theatre on a Sunday night. There were people dressed up in their favourite characters from Kingdom Hearts and Final Fantasy. Such awesome costumes and enormous effort had gone into them.  You can really feel the anticipation and excitement of what is to come.

Personally, I love piano and Final Fantasy but I did not know what to expect as I’ve never been to a solo piano concert dedicating the entire night to playing music from soundtracks of these 2 epic video games!

As the red velvet curtains rise up slowly smoke creeps out little by little. You see Natalya, (Natalya Plays Piano) blonde hair with pink fairy floss ends braided back on one side, in a beautiful princess-like pink dress with feathers and sparkles on it. She is seated in front of black grand piano with little anime figurines seating on the top right hand side of it. She opens the night with Dearly Beloved from Kingdom Hearts.  What a fantastic way to open the night. Such a moving, soft, wonderfully composed song by Yoko Shimomura. It’s definitely one my favourite songs. The girl next to me was so touched by the arrangement that it brought tears to her eyes.

After she finishes playing this piece, Natayla gets up and talks about how this evening is going to go. 1st half will be Kingdom Hearts and 2nd half will be Final Fantasy. She also talks bit about the backstories of these 2 games. As she continues, in the next piece you can really see her passion … and talent in the way those fingers move across those 88 keys. She really makes it look so deceptively easy.

Through an exciting and varied night, she showcases many different genres from the soundtracks. After each piece, she tells stories to put into context what each piece of music means, as well as its history and how much technology has changed and revolutionised gaming.  Also, how gaming soundtracks first break into pop music, chart toppings through the decades.   You travel into her evident love, from a young age, of gaming, classical music and Japanese composers. So lovely and clever that she has managed to combine and perform all of her passions into this one special event. My highlight of WORLDS CONNECTED  would have to be watching her play melodies of conflict … which is a whole bunch of battle themes. This was definitely a challenging play. She really gave those fingers and 88 keys a good workout. You can see the relief on her face when she finished and she deserves that sip of her champagne. The audience was so especially ecstatic at this section

As the pink feathers of her stunning costume fell to the floor , Natalya joked about how her cat would love to play with them and how usually her cat would be her piano practice companion. “It’s nice to be able to play the piano in peace.”  The audience laughed and absolutely loved it.

She also talked about how she picked one of the songs to feature that night ‘cos her mum hated it. And that she is sure that her mum still hates it. It was a very unusual piece with competing and changing rhythms …  again a very tricky song to play. She laughs “All the weird songs basically are from Final Fantasy!” She has a lovely rapport with the audience.

Watching Natalya play through the evening was truly mesmerising. She has such a great sense of humour too. One moment I’m giggling, the next I was holding my breath wondering how does she makes those massive jumps up and down the octaves with such ease? It has completely motivated me into getting myself a new keyboard and start playing again. I couldn’t help but to go on her YouTube channel to watch her play after the show had finished.

Natayla is a unique artist to keep an eye out for as she has definitely got a wonderfully unusual and eclectic show here. It is beautifully put together with the choices of music guaranteeing the momentum.   Whether you’re a gaming fan, piano enthusiast, anime fan or just love music in general, there is something for everybody here. You don’t need to have knowledge about the games at all. As my friend said “Watching and listening to her playing what she loves was such a delight!”

I really hope Natayla’s dream of taking this first solo show on tour will come pass so hit her YouTube channel to see what you missed and follow her on Facebook so you don’t miss her next gig!