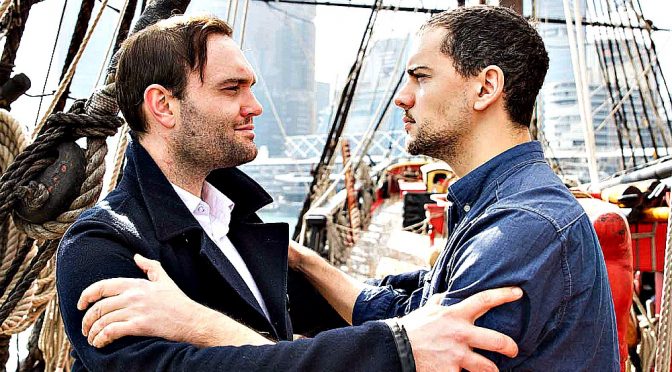 Featured photo – Blake Erickson and Nic Starte in Between Worlds.

Sydney theatre lovers will have the chance in July to see the first public staged workshop presentation of an exciting new Australian musical, BETWEEN WORLDS.

The musical tells a fascinating, little known story, the last journey of the founder of our country, Captain James Cook. The time is 1779 and Cook has sailed to Hawaii where he was received as a returning God named Lono.

Cook began immersing himself in the local Polynesian culture however he was tragically killed one month after his landing in a melee that broke out between the British and the Hawaiians at  Kealakekua Bay.

Over the past three years Jason Langley has drawn together an exciting collection of Sydney’s seasoned and emerging musical theatre talent to progress the show from libretto to the professional stage.

The July workshops that will take place on the 15th and 16th July  ATYP ‘s Studio 1. The workshop  will feature a cast which includes Blake Erickson as James Cook, Pippa Grandison as Elizabeth Cook, Phillip Lowe as Admiral Isaac Smith and Stephen Mahy as William Bligh.

Sydney Arts Guide has one double pass to give away to the matinee performance that will take place on Sunday July 16. Be the first to editor.sydneyartsguide@gmail.com . The winner will be advised by email.