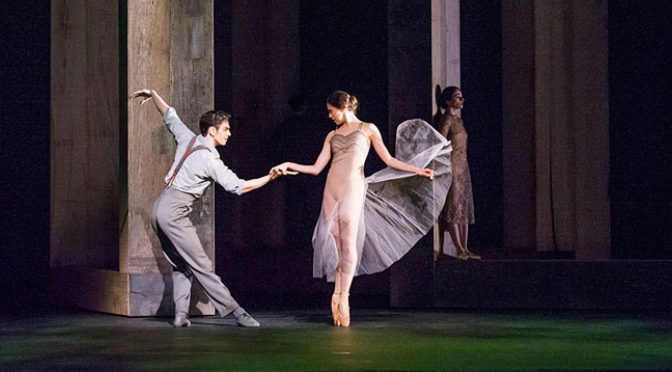 Originally created in 2015 this is a welcome return of resident choreographer Wayne McGregor’s three part work based on the life and works of Virginia Woolf.

McGregor’s three acts delve into three of Woolf’s novels, interwoven with images from her own life. The choreography is athletic and extremely demanding at times with death defying leaps and catches in the partnering and laser sharp legs .The Royal Ballet dancers are AMAZING.

The evening begins with the only extant recording of Woolf’s voice (made by the BBC, in 1937), with Woolf reading from her essay On Craftsmanship, regarding the crafting of words and language.

This program is important as it is now a decade since McGregor became resident choreographer for the Royal Ballet. It is also marvellous to see Alessandra Ferri, now 53, reprising the role thrust on her by McGregor, in the opening and closing ballets, with a fluid, dark and charismatic grace and arresting stage presence.

The opening work I now, I then was a dramatically lyrical mood piece based on Woolf’s novel Mrs Dalloway. Richter’s score was pulsating and lyrical. Cigues’ set designs consisted of rather ominous looming large wooden frames that revolved.

Alessandra Ferri as Mrs Dalloway is marvellous.The piece features her reminiscing about her happier, younger self over the course of a day. Ferri has some fabulous, intense pas de deux with Gary Avis as her husband and as well with Ferderico Bonnelli as shell shocked soldier Septimus.

Francesca Hayward as Sally, with whom Mrs Dalloway had a brief affair, darts through dragon-fly like as a mesmerizing memory and their kiss is remembered with a smile.

With its use of haze and laser lighting as directed by Lucy Carter the production is quite futuristic, at times visually reminiscent of a spaceship .The women wear gold caterpillar like eyebrows, which gives them an alien like appearance.

The piece begins with stark flashes of spotlight on fully heavily sixteenth century clothed dancers and concludes with them stripped to skin coloured body suits. The score is driven and relentless. The dancers are sinuous and athletic, at times reptilian, and at other times feline.

The costumes for men and women were interchangeable with ruffs and high unflattering very short tiny tutus in gold and black.

There is a very strong section for six men. Edward Watson has a fabulous slinky, sinuous solo and Eric Underwood in black and gold has a showy solo against a background of red haze.

The third work, Tuesday,  was based on Woolf’s The Waves, along with various of her  letters. The Waves is basically a series monologues, each narrated by a character based on people in Woolf’s circle, including the author herself.

The ballet begins with a voiceover read by Gillian Anderson of Woolf’s farewell letter to her husband with Ferri spotlit and alone under the huge projection panel – the panel features moody black and white projections of waves at the beach. This was a rather abstract ballet, albeit  haunting and hypnotic. The score is simultaneously driven and relentless.

There are some astonishing almost death defying pas de deux for Ferri and Bonnelli with Ferri at times floating, twisting in Bonelli’s arms or in the dangerous runs and catches as she remembers her lost love.

There is a charming scene with children from the Royal Ballet school as children on the beach and Sarah Lamb as a radiant, younger Woolf. At one point rope is used in a Graham-like effect.

The last third of the work was mostly the huge cast as waves, cascading, ebbing, flowing, pulsating around Ferri leading to the poignant ending with Ferri barefoot and alone blending in with the corps of waves until she is alone.

This was a very moving, wonderful program.

The Royal Ballet in WOOLF WORKS is screening as part of the Palace Opera and Ballet season between the 17th and the 22nd March.

There is also the opportunity to see this show live.The Royal Ballet will be performing WOOLF at the Queensland Performing Arts Centre in Brisbane between the 29th June and the 2nd July.