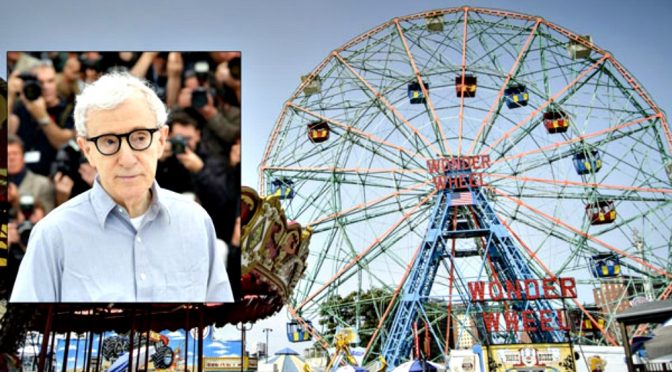 Light on laughs but colossal in its homage to American theatrical drama of the 2oth century, Woody Allen‘s WONDER WHEEL is a dark carnival attraction bathed in golden light by wondrous cinematographer, Vittorio Storaro.

Channelling Eugene O’Neill, Tennessee Williams and Arthur Miller, and funnelling his own septuagenarian sensibilities through the prism of nostalgia, WONDER WHEEL tells the story of four characters whose lives intertwine amid the hustle and bustle of the Coney Island amusement park in the 1950s.

Ginny (Kate Winslet), a melancholy, emotionally volatile former actress now working as a waitress in a clam house. The world was once her oyster, now she’s shackled to the shucked, and Humpty (Jim Belushi), her shambling and dishevelled carousel operator husband.

Ginny meets Mickey (Justin Timberlake), a handsome young lifeguard who dreams of becoming a playwright and embarks on an affair. Meanwhile, Carolina (Juno Temple), Humpty’s long-estranged daughter, appears and asks for sanctuary and succour from her dumb sucker of a gangster husband.

Humpty, for all his rough hewn, alcohol addicted flaws is a person of loyalty and protectiveness. Still grieving the death of his first wife, he provides Ginny and her troubled son Richie (Jack Gore) with a home, albeit one in a cramped apartment in the midst of the cacophony of Coney Island amusement park’s famed Wonder Wheel, and now he harbours his delinquent daughter from the hoodlums sent by her husband bent on homicide.

Kate Winslet is lustrous as the listless Ginny, guilty at the breakup of her first marriage, begrudgingly grateful for Humpty’s source of domestic stability, and then jealous and guilty of her illicit liaison with the younger man, Mickey. Hers is a portrait of a person trying to be good, persevering with her lot, yet despairing of her dreams denied. Heading into middle age, she is still a dreamer, and looks to Mickey as a lifeline with the potential to permanently rescue her from all the mistakes and disappointments of her past life.

Justin Timberlake as Mickey, takes the mantle of narrator, breaking the fourth wall to address the audience directly. As a budding playwright, his relationship with an unhappily married woman flatters his romantic self-image, but he’s not necessarily thinking long-term.

Jim Belushi is a stand out as Humpty, a good egg, who has managed to scramble his way back after the double fall of his early widower status and the subsequent estrangement from his only child. If not completely put back together again, he is rejuvenated by the re-emergence of Carolina in his life. Having a daughter around to love provides surprising joy, as well as a new-found purpose: setting aside money for her to attend night school.

Juno Temple is an inspiration as Carolina, a pert prodigal returned to heal one rift only to rent another.

Beautifully augmented with a peerless production design by Santo Loquasto and costume design by Suzy Benzinger,

WONDER WHEEL is a slow burn dramatic tale of passion, violence, and betrayal that carries the weight of authentic, accumulated and amalgamated pain and guilt.