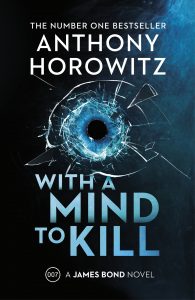 With a title reminiscent of an earlier Fleming short story, From A View To A Kill, Anthony Horowitz’s third and final James Bond continuation novel, WITH A MIND TO KILL picks up straight after The Man With The Golden Gun, the last of Ian Fleming’s 007 adventures which was published posthumously.

Tapping into the first few chapters of The Man With The Golden Gun and its focus on Russian mind control or brainwashing as it became colloquially known, WITH A MIND TO KILL is a mind-rape revenge story with Her Majesty’s Secret Service conjuring an audacious counter-plot, a return to sender billet d’acide, with double O Seven doubled up as a double agent in a double barrelled double cross.

WITH A MIND TO KILL follows the suicide mission trope established in You Only Live Twice, suicide and assassination symbiotic siblings sired by Her Majesty’s Secret Service, adopted by her sharpest blunt instrument.

A few passages in the description of East Berlin have been lifted from Fleming’s collection of travel journalism, Thrilling Cities, and a particular reverie takes us back to Casino Royale, Chapter 20, where Bond is determined to resign and Mathis implores him, “don’t let me down and become human yourself.”

Bond’s observations about Russia are depressingly prescient: “Evil in this country wasn’t just a group of men talking in a room…it wasn’t one madman hanging out…it was a huge machine, a sickness that had corroded itself into the souls of a hundred million people and at the end of the day they were he only ones who would ever be able to rid themselves of it.”

Colonel Boris is a sulphurously infernal villain, a neurological nemesis, Katya Leonova, the tragic heroine with a whisper of Vesper Lynd.

Appallingly appealing, my one qualm is the over egging of the easter eggs, footnotes tripping the feet of what is largely a neat feat of thriller writing.

With WITH A MIND TO KILL, Horowitz is done with Fleming. The book’s ending gives a hint that he may be taking up the legacy of Le Carre.

WITH A MIND TO KILL by Anthony Horowitz is published by Jonathan Cape.