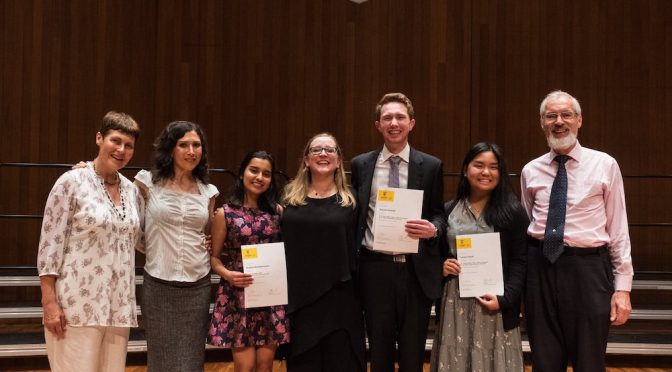 The Music Performance Unit UNSW is proud to announce Elizabeth Younan and Michael Grebla as joint winners of the Willgoss Ensemble Composition Prize for 2020. The Prize is aimed at encouraging and promoting the creation of an original, short work for ensembles, in support of a thriving instrumental and choral program at UNSW Sydney.

The winners will each receive $2500 and will be commissioned to compose an original, short work for one of UNSW’s community ensembles. Elizabeth Younan’s will be for brass and percussion ensemble and Michael Grebla’s for string ensemble. Both will be performed in the 2021 season by members of UNSW Orchestra and UNSW Wind Symphony.

Elizabeth is of Lebanese descent and from Sydney, and until recently, was living in Philadelphia, USA. She was a featured Australian composer of Musica Viva’s 2018 International Concert Season, where her Piano Sonata was premiered by Van Cliburn silver medallist Joyce Yang. The work was subsequently nominated for Instrumental Work of the Year at the 2019 Art Music Awards. Elizabeth holds bachelors and masters degrees in composition from the Sydney Conservatorium of Music, where she studied with composer Carl Vine AO as a recipient of the Australian Postgraduate Award. Elizabeth currently studies as an artist diploma student under full scholarship at the Curtis Institute of Music in Philadelphia, where she holds the Jimmy Brent Fellowship. She is the second Australian composer to be admitted to Curtis and studies with Dr Jennifer Higdon and Dr David Ludwig.

Michael is an international award-winning emerging composer from Western Australia and based in New York City. With a deep conviction for the role music plays as a unifying mechanism in society, constructing identity and building community, he endeavours to create meaningful and inclusive cultural experiences, bridging tradition and the present through his music. In recent years, his works have dealt with ideas of journey, displacement, transience and spirituality, offering his own deeply introspective expression and examination of the human experience. CutCommon magazine has described him as spreading music as “a testament to the universal strength and endurance of the human spirit”.

He has been recognised with grants and awards from the New York Composer’s Circle, the Zodiac Festival in France, the Australia Council for the Arts and the Australian America Association. Michael’s work has been performed internationally at festivals including the Atlantic Music, Connecticut Summerfest, Charlotte New Music and TUTTI festivals. His work has also been performed by ensembles such as Ethel, Beo, Hub New Music, the Australian Youth Orchestra and the West Australian Symphony Orchestra. Michael is a John Monash Scholar and holds a masters of music with honours from the New England Conservatory and undergraduate degrees from the University of Western Australia in mechanical engineering and music with first-class honours.

Dr Richard Willgoss and his wife Sue have generously provided support for this prize, to assist and inspire composers of the highest standard, with a focus on creativity and excellence. Dr Willgoss was the inaugural Head of UNSW’s Department of Mechatronics. While transitioning to retirement, he studied for a double degree in music and philosophy, specialising in composition, and joined UNSW’s elite choral ensemble the Burgundian Consort.