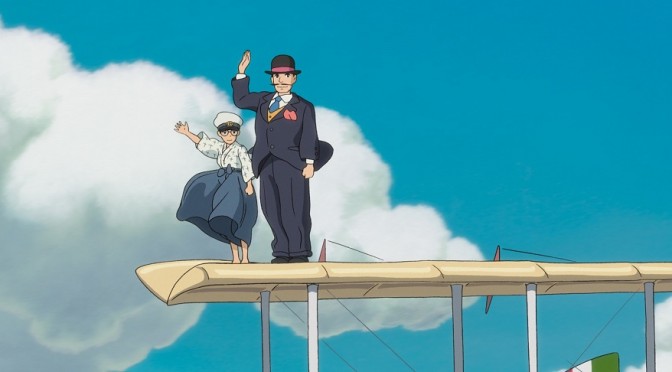 PONYO and HOWL’S MOVING CASTLE director Hayao Miyazaki’s final animation masterpiece from Studio Ghibli is the new film THE WIND RISES. At the age of 72, the great Japanese animator Miyazaki Hayao, has announced his retirement.

The Wind Rises (風立ちぬ Kaze Tachinu?) is based on the manga of the same name, which is in turn based on a short story by Tatsuo Hori, a writer, poet and translator from mid-20th century Japan. Kaze Tachinu is a fictionalised biography of the innovative aeronautical engineer Jiro Horikoshi, the genius designer of the two fighter aircraft that Japan used during World War II. The Mitsubishi A5M (featured in the movie) and its famous successor, the Mitsubishi A6M Zero.

The film chronicles much of the life story of Jiro, who dreams of flying airplanes and designing beautiful airplanes, inspired whilst in dream-state by the famous Italian aeronautical designer Caproni. Nearsighted from a young age and unable to be a pilot, in 1927 Jiro joins a major Japanese engineering company (Mitsuibishi) in their aircraft division, and in time becomes the world’s most innovative and accomplished airplane designer.

Key historical events that deeply effect the course of Jiro’s life, and Japan of the 1920s and 1930s are depicted in breathtaking detail and with extraordinary beauty in vivid colour and form, with the Great Kanto Earthquake and fire of 1923, the Great Depression, the tuberculosis epidemic, whilst ever preparing new aircraft for the Japanese plunge into World War II. Jiro dreams of Caproni, who asks of him, “Do you prefer a world with pyramids, or with no pyramids?”

Jiro meets and falls in love with the shy Nahoko, who is afflicted with tuberculosis, and refuses to marry until she recovers. Jiro grows and cherishes his friendship with his colleague Honjo and Jiro innovates constantly, and his genius takes the aviation world into the future.

Hayao Miyazaki brings together the engineer Jiro Horikoshi and the author Tatsuo Hori, who lived during the time of the story of The Wind Rises, to create Jiro, a fictional character at the center of an epic tale of love, perseverance, and the challenges of living and making choices in a turbulent world.

Writer and director Hayao Miyazaki pays tribute to engineer Jiro Horikoshi and author Tatsuo Hori in this epic tale of love, perseverance, and the challenges of living and making choices in a turbulent world.