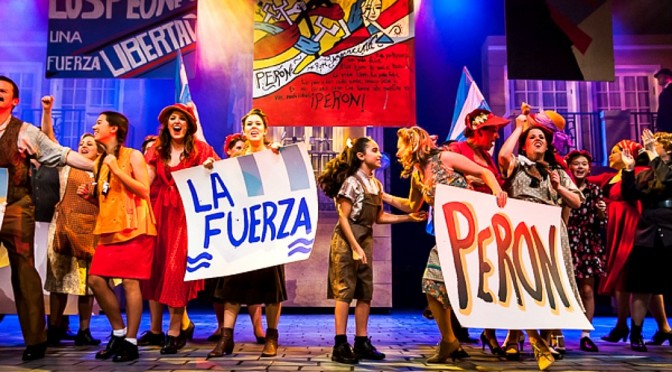 Willoughby Theatre Company productions just keep on getting better and better. This amazing production of this now iconic musical, with its huge cast, under the direction of Declan Moore, transports us to Buenos Aires. As we enter and take our seats, tango music softly plays.

Greed, power and corruption ooze through this show. There is much cynical manipulation of the common people and unacknowledged hypocrisy. The musical, told in flashback- it starts with Eva’s funeral- tells the story of the life of Argentine political leader Eva Perón, the second wife of Argentine president Juan Perón.

The narrative of the show follows Eva’s early life, rise to power, charity work, international tours and eventual death at a young age of cancer.The narrator/commentator figure of Che acts as an everyman figure.

There is one gigantic set for the entire production with revolving doors, sliding panels allowing for mainly fluid, almost cinematic ,scene changes.

Lighting by Sean Clarke is dramatic and atmospheric.

There are umpteen amazing costumes throughout, ranging from colourful yet poverty stricken garb to Eva’s many ultra glamorous, sumptuous gowns.

The orchestra under the baton of maestro Greg Jones is tremendous and performed Lloyd Webber’s rather astringent, challenging rock opera with gusto. Alert listeners will notice hints of his other scores for ‘Jesus Christ Superstar’ and ‘Phantom of the Opera’ .

Amy Gough’s choreography is sometimes inspired by the tango music whilst at other times feels more stylised and formal.

As our heroine, of sorts, Eva Peron, Virginia Natoli, similar in looks to Nicole Kidman, dazzles . We see her grow from ambitious minx to radio star, and then transform into the stunning First Lady of Argentina.

At times she is progressive and poignant yet we also we see the hard, ruthless and aggressive side of her.

Natoli handles the difficult and extremely demanding role very well, fiery and passionate at times, dancing up a storm and stopping the show with her iconic ‘Don’t Cry For Me Argentina’ .

Clive Hobson as Juan Peron is tremendous, – distinguished looking yet slightly sinister, with a terrific voice and displaying a great deal of tenderness at the tragic end.

Peron’s former mistress, evicted by Eva, was memorably played by raven haired beauty Lucy Hood who exquisitely sang the haunting ‘Another Suitcase in Another Hall’.

The huge boisterous crowd scenes show Eva’s popularity with the common people and mention must be made of the children in the cast – Julia Manias made the most of a beautiful poignant solo in the second half of the show.

This is an exciting, enthralling and captivating production.

Willoughby Theatre Company’s production of EVITA is playing the Concourse at Chatswood until the 31st May.