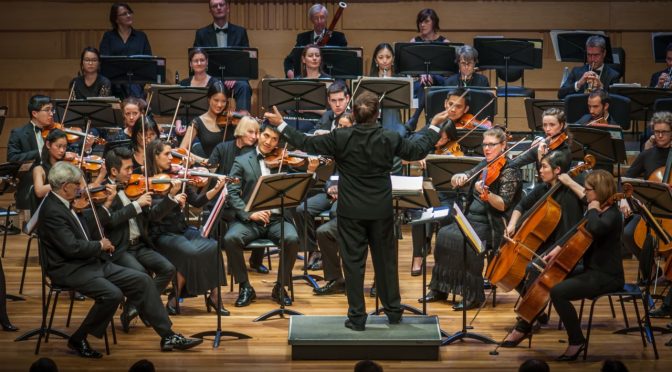 Then came an astonishing virtuoso performance of Henri Tomasi’s Trumpet Concerto, with guest star Rainer Saville in a dazzling display. It was a challenging showcase. Sometimes the Orchestra was rich and flowing, other times sharp and spiky. Saville on trumpet was like a leading tenor with sliding runs and trills and at times a rather martial sound.

In parts, the music was slow and languid with fluttering , pulsating strings, twinkling and quivering. At other times , especially for the solo trumpet it was almost impossibly fast which then changed to a teasing dialogue between trumpet and Orchestra with sharp, spiky rhythms.

For an encore Saville performed a dynamic solo, bright, showy and seductive,  the first piece from Giacinto Scelsi’s 4 Pieces for Solo Trumpet.

After interval we heard Edward Elgar’s Enigma Variations (. Variations on an Original Theme , Op.36 ) Can you break the code and identify who is portrayed? Or hear the possibly hidden melody? Balletomanes might perhaps think of Ashton’s ballet to the work, film lovers might think of one section used in Dunkirk.

Elgar dedicated the work “to my friends pictured within”, each variation being a musical sketch of one of his circle of close acquaintances. Those portrayed include Elgar’s wife Alice, his friend and publisher Augustus J .Jaeger and Elgar himself. One of the most famous variations is known as the ‘Nimrod’ Variation , a musical portrait of Augustus J Jaeger used at the opening of the 2012 London Olympics and at other various solemn, important events .Can you distinguish the Mendelssohn quote ?

The work was given a rich , finely nuanced performance by the Orchestra and it ranged from bluff and blustery to lyrical and romantic, from strident to flowing, from boisterous to melancholy and reflective. Sometimes it is arrogant and blustery, other times far more delicate and fragile .

To send us home the Orchestra performed a rousing encore, a stirring version of Land Of Hope And Glory as a taster of their next concert Last Night of The Proms