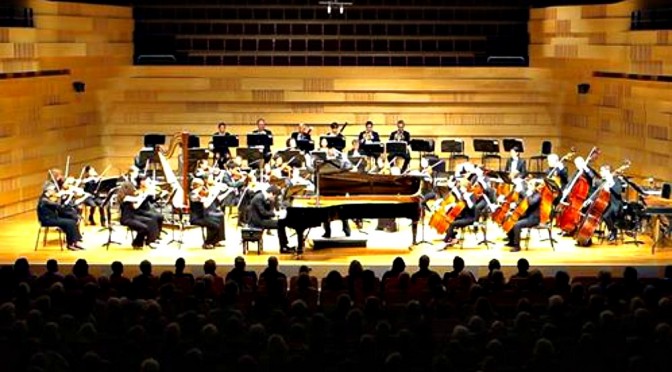 BRAVURA indeed with an astonishing ,breathtaking performance by the Willoughby Symphony with their latest concert BRAVURA and guest star Tony Lee on piano . Dr Nicholas Milton conducted energetically and enthusiastically yet was extremely precise .The orchestra gave a crisp , polished performance that was inspired, fiery and passionate where required with a rich well – rounded tone.

First we heard Zoltan Kodaly’s Dances of Galanta , a set of Hungarian dances based on traditional Gypsy themes . Horns blare then the exuberant dances begin with their whirling , infectious melodies , with slithering sensuous clarinet ,shimmering , quivering strings and insistent woodwind leading to the fiery , explosive conclusion .

For this reviewer the major highlight was Franz Lizst’s Piano Concerto No 2 in A , S 125 in four movements with multi award-winning Australian Lee as soloist. It began at a moderate pace with flowing woodwind which were joined by rich strings. Lee on piano at first played delicately, like crystal water drops. It then became shimmering and cascading , changing to fiery and emphatic , insisting listen to me! .There was an almost martial atmosphere at this point , strings a strong undercurrent . Lee on piano suddenly leaps and bounds, with scurrying strings.

The piano returns to whirling and leaping with a sudden change back to shimmering crystal . Pulsating throbbing strings rumble while the piano floats into a lyrical, flowing solo ‘aria’ which then changes to an emphatic, spiky dialogue – almost confrontation – with the Orchestra before a return to calmer waters. But then Lee on piano suddenly darts and jumps leading to the crashing , tumultuous ending , leaving everyone gasping.

For an encore Lee treated us to a volcanic ,insistent solo performance of the last movement of Prokofiev’s 7th Sonata that took us to interval.

After interval came a strong, impassioned performance of Brahms’ Symphony No 4 in E Minor Op 98., the last of his four symphonies. It is very complex and an immaculate example of symphonic construction , finely nuanced and with great attention to phrasing and balance.

The piece  had a rich multilayered opening with a sweeping luxurious waltz like melody followed by vibrant woodwind with delicate pizzicato from the strings. The woodwind become emphatic and then there are flowing strings and woodwind sections leading to the stirring ending with crashing drums.

The second movement begins with the horns blaring the melody after which the strings limpidly , richly flow , interwoven with the woodwind. There is a measured, thoughtful passing around the various sections of the orchestra development of the melody which become brisk and animated but then slows back to a calmer mood with a throbbing undertone of strings.

The third movement opens with an explosive BANG – a tumultuous start .The orchestra is very strong and emphatic – it is a thunderous, galloping ,boisterous discussion between the various sections. And listen out for the triangle!

The final fourth movement had a powerful dramatic opening , and there was snaky woodwind and repetition of a circling melody featuring elegant strings and haunting insistent woodwind .the mood changed to steely , with scurrying strings and darting woodwind leading to the throbbing wall of sound for the conclusion.

Willoughby Symphony’s BRAVURA played  at The Concourse , Chatswood 21 and 22 September 2019