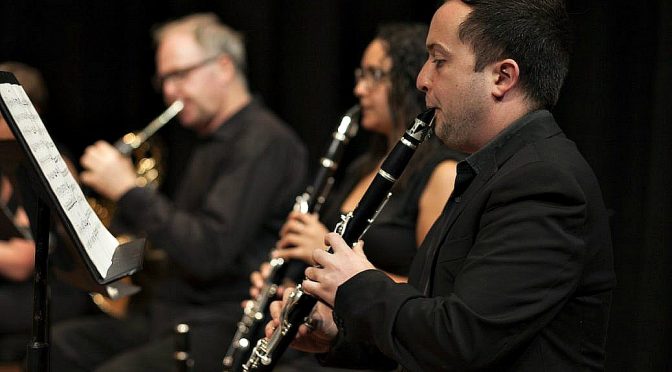 The second of the new chamber series of concerts by Willoughby Symphony at the Zenith Theatre at Chatswood was most exciting with some sensational performances and excellent ensemble work. The various short works were mostly presented in chronological order of composition .The program was introduced and led by Madeleine Retter of the WSO.

The opening work was Giovanni Gabrielli’s bright, swirling Canzona Per Sonare No 1` La Spirita , bridging Renaissance and Baroque styles,that was flowing and exuberant and finished with a cheeky flourish.

Luigi Boccherini’s Guitar Quintet in D Major G 448 (1798) featuring Andrew Blanch on guitar and a demanding virtuoso cello part (Liam Meany) opened with a graceful, elegant first movement that was simply divine. Andrew Blanch on guitar was in assertive voice yet also in fine rapport with his colleagues.You could hear the Spanish influences throughout .The second movement began briskly and was vibrant and fast with circular melodies The third movement had a melancholy, limpid and aching opening which led to contrasting fiery repeated rhythms .The final movement with its infectious melodies included a buzzing , very fast duet for cello and guitar with mini solos for both.

The eddying, flowing Cras string trios (1927) oscillating first movement opened with an insistent monotone on the cello (the rise and fall of the warship it was written on?) contrasted with sharp spiky sections and soaring violins.The pulsating second movement was slower and seemed rather melancholy.The third movement was an animated bubbling discussion between the various players and the final, fourth movement had a very fast cello opening that led to a dynamic showcase of shimmering, thrumming strings.

The next work – the bravura showpiece of Lizst’s Hungarian Rhapsody No.2 (1847) – was no, not on piano as would generally be expected, but instead was a striking , passionate, powerful and strident version for trumpets and trombones that was buoyant and had a breathless , excited conclusion.

Nigel Westlake’s TALL TALES but true that gave the title to the concert included a quite demanding piano section and a very busy percussion element From its fragile, haunting opening it shimmered and pulsated with jungle like sounds at times, sudden softer sections that then grew in force again and slinky, infectious melodies . Alex McCracken was kept very busy on bass clarinet. The septet was given a vibrant performance full of flair.

The Willoughby Symphony [Facebook] Chamber Series in TALL TALES was one performance only Sunday 20 May 2018 .The next concert in the chamber series is on August 12