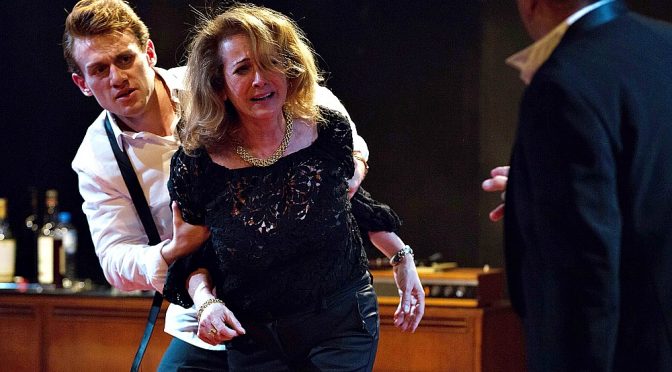 Plenty of shots are fired in the late, great Edward Albee’s classic drama, WHO’S AFRAID OF VIRGINIA WOOLF. Middle-aged couple George and Mildred marriage is a war zone and they invite another couple, Nick and Honey, over to unwittingly join them on the front line.

This latest revival of this oft performed Albee work has been put on by the Theatron Group.

A good creative team comprising John Pryce-Jones’ raised platform set of George and Martha’s 1960’s living room, Martin Kinnane’s sharp lighting design, and Alistair Wallace’s subtle sound design create a very distinct world for what is a stellar cast to weave their spell in. This small troupe of players genuinely seize upon the ‘meaty’ roles which Albee has gifted them.

Nicholas Papademitriou’s George starts off rather meekly but soon dishes out as much vitriol as he receives.

Christian Charisiou is George’s fellow more mild mannered academic, Nick, who finds himself drawn into the feud and then reveals his own rather caustic and ambitious nature.

Adele Querol impressed greatly, giving a performance of many different shades, as the delicate, nervy, strange Honey who is completely thrown by George and Martha’s violent bickering.

At the end of the night, Nick and Honey have exited stage left in a great rush, George and Martha are kneeling down, centre stage, in a quivering mess, and we, the audience, are about to leave feeling similarly dissipated.

4 thoughts on “WHO’S AFRAID OF VIRGINIA WOOLF? @ THE GREEK THEATRE”