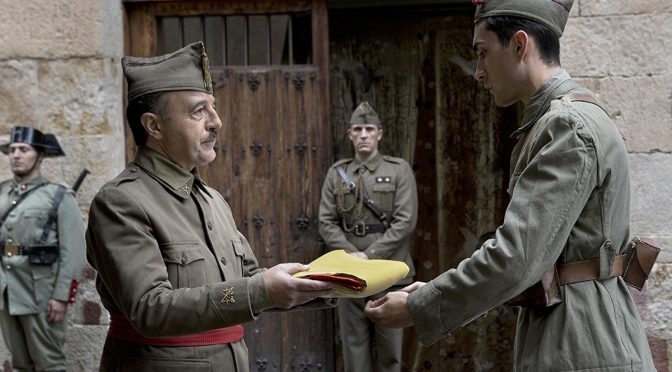 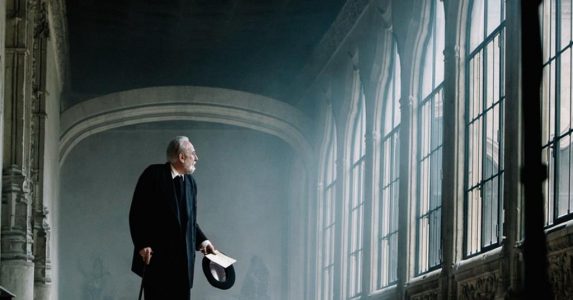 A highlight of the Moro Spanish Film Festival, WHILE AT WAR is an informative and entertaining history lesson about the rise of Franco during the Spanish Civil War.

Written and directed by Alejandro Amenabar, WHILE AT WAR is set in 1936 as Salamanca is occupied by the Nationalists and the socialist mayor arrested and assassinated.

Three friends who meet for daily coffee, the writer and academic, Miguel de Unamuno, Atilano Coco, a Protestant evangelist and Salvadore Vila Hernandez, a former student and Leftist intellectual have conflicting views about the coup, arguing pros and cons for the ensuing strife. Their arguments are civil as opposed to the simmering hostilities between political factions.

In a case of methinks he protests too much, General Franco declines persistent urging to take the position as a single Nationalist leader. But as in all political movements, factionalism in Fascism creates fissures and Franco finally accedes and assumes supreme command, a tenure defined “while at war.”

As the Fascists inflict atrocities with Franco seeing himself as a catholic warrior, Unamuno rethinks his previous support, questioning his own cowardice in the face of his comrades’ kidnapping and killing.

Amenabar sets up the film’s climax with a public quarrel with the Nationalist general Millan Astray at the university, decrying the Fascist motto, Long Live Death.

In great dramatic tradition, he traduces the militarists, using parts of the documented, albeit disputed, tirade.

He denounces General Millán Astray as a cripple, a war cripple, and announces soon Spain will have very many more. “It torments me to think that General Millán Astray could dictate the norms of the psychology of the masses. A cripple, who lacks the spiritual greatness of Cervantes, hopes to find relief by adding to the number of cripples around him.”

His plea continues: “In order to convince it is necessary to persuade, and to persuade you will need something that you lack: reason and right in the struggle”.

WHILE AT WAR is an entirely entertaining history lesson with a lesson for the present, a prescient reminder that if we do not learn from history we may be condemned to repeat it.