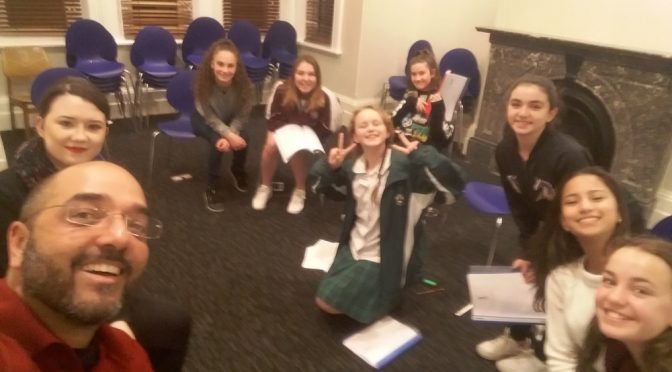 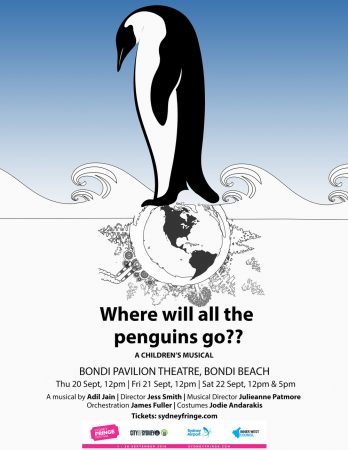 These kids are just great and they have a topic they can get their teeth into.  WHERE WILL ALL THE PENGUINS GO?, playing as part of the Sydney Fringe, will give them a voice on issues such as the environment and the dangers of plastic bottles, war, refugees and the importance of family.

They are young but committed and they wear their heart on their sleeve as the ensemble brings a story of two brothers.  Brothers who see life in different ways and who grow apart as economic choices separate them.

The scenes are short and sharp, more like epithets within the more linear storytelling.  The doomsday scenarios truncated to bite size, there are no long songs for any littler ones to get bored and the dialogue is very appropriate for talking about the issues with children.  It’s physical and shows off the rehearsal hard work of the ensemble in the stagecraft.

I’m sorry cast, but I don’t have names to put to your characters but everyone shone in their roles.  You all knew your lines, knew where to go and really coped well with the props and staging.   The ensemble are:

A few things that I really enjoyed were: Brother 1 does a great job with her acting and fights through her opening night nerves to settle into her singing.  Brother 2 uses her voice really well in ‘We live in a selfish world‘ and the choreography in that bit was really interesting with the theme well put. Her work as the broke billionaire had very strong pathos.  These two had a nice relationship from the beginning and the scene when a tragedy occurs was very well performed, as was their meeting towards the end.

The farmer had lovely emotion in ‘ The rains don’t come‘.  The trio in ‘The sea ‘ did a sweet job in a nice quick scene. The tall environmental dude was very poignant in his duet with the farmer.  Charming acting from the character who would become ‘Angel’.  The girl who played the housewife in the boat scene was heartbreaking. The Mother Nature character had the maturity needed to foreground the kids work and the ‘You can’t hurt me’ to solo guitar song had good audience engagement and a sweet character.

There were some good musical bits.  The ‘Our bellies are full‘ showed some great chorus work. ‘Moving away from plastic‘ was also an entertaining chorus song.  Powerful lyrics were well expressed in ‘Our country is better than their country.’

Some of the concepts really pop.  I loved the science explanation with the whiteboard.  ‘We need energy’.  And the slo-mo war with the siren sounding and interesting graphics was well created and acted by the children.  And the boat, too.

The visuals are good and it’s great to use mics to reduce the stress associated with performance for these young people.  But kids you need to get those grownups under control.  Leaving you waiting for lighting and sound cues requires a severe talking to and the visual stuff needs to get sorted so you aren’t left hanging before the show starts.   Adults !!! What can you do?

It’s a great job from the youth cast and summed up in the Penguin Song of the finale which was just full of the joy of performing.  Keep it up kids, I look forward to seeing your work again soon.

WHERE WILL ALL THE PENGUINS GO? is playing at Bondi Pavilion as part of the Sydney Fringe until September 22. 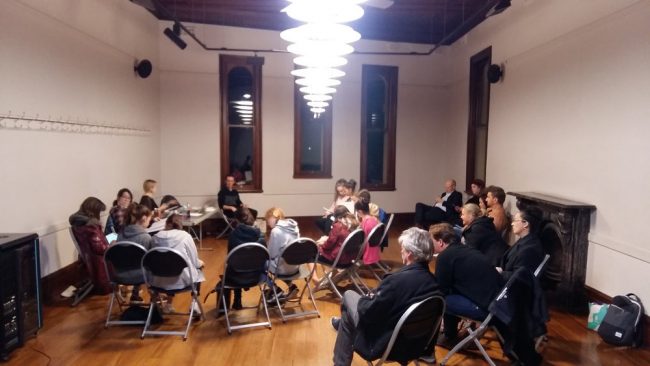 2 thoughts on “WHERE WILL ALL THE PENGUINS GO? GREAT JOB KIDS!”