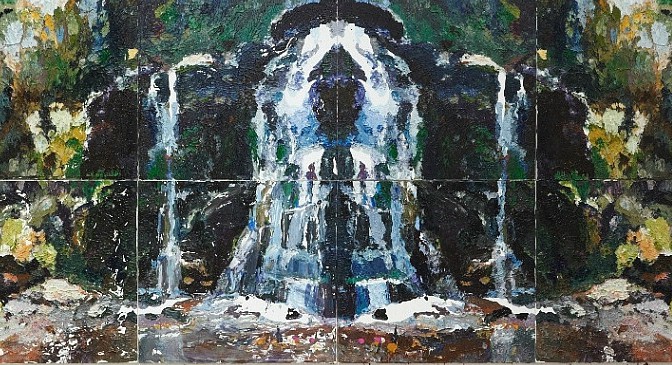 A thought-provoking exhibition, When silence falls is currently showing at the Art Gallery of NSW until 1 May 2016. It presents works from artists across Australia and the world who speak for those often silenced by horrific massacres, displacement and political dictate. Their art is powerful and arguably more emotive and sensual than the written word, thus making this an important striking exhibition.

Encompassing painting, video and sculpture, the collection-based exhibition features a new major acquisition by Australian Indigenous artist, Judy Watson. From the Gulf Region, Picnic with the natives, draws the Matthew Flinders colonial map imposed as the background to massacre sites. In her Internal Landscape she paints buttons pinning the work down and being listening devices and speakers for events when Aboriginals were left nailed to walls.

The glossiest work is from Pakistan, Adeela Suleman’s The Warrior. Ironically heraldic and beautiful with its silver shine, the single soldier, the decorated hero of war, is anonymous and beheaded.

Daniel Boyd in his Untitled work shows figures turned away, leaving. Vanuatu is veiled in transparent dots, and a forest branch appears to have a vine noose.

Ben Quilty’s 8 large panels of oil on linen Fairy Bower Rorschach provides a psychological test as we see both the idyllic and the dark, black brooding around apparent small figures at the centre

Almost an entire wall is devoted to a number of artists from Gija, Kimberley. Paddy Bedford, Timmy Timms and Rusty Peters each portray a different massacre. The landmark boab tree and a black hole through which an ancestor escaped anchor these stories in truth.

The presentation of the work of contemporary Aboriginal artists alongside contemporary international artists is one that demonstrates, in Cara Pinchbeck, the curator’s words “the shared nature of humanity, our transient existence and the inescapable sadness of suffering”. It is an exhibition that “speaks strongly of conflict but does not look to lay blame”. It stirs deep emotions and is definitely worth contemplation.