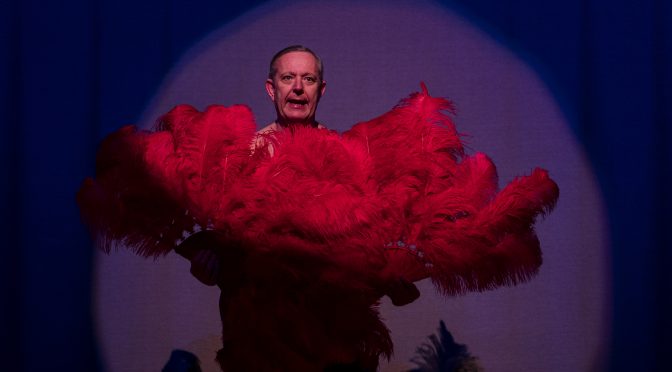 The Wharf Revue has become an end-of-year Sydney theatrical tradition, usually selling out well in advance. Now in its 16th year, the latest iteration, Back to Bite You, is once again written and performed by Drew Forsythe, Jonathan Biggins, and Phil Scott, with newcomer Paige Gardiner taking on the girls’ roles on the night I attended.

Like previous Revues, this one covers the year’s local political landscape, with a fair smattering of US election and a bit of Brexit thrown in for good measure. Also, like previous incarnations, some parts work better than others.The show begins in Ancient Rome, where the supporters of Antoninus Abbottus are scheming to depose Malcolmus Maximus, the Emperor of the Eastern Suburbs. This part involves passable caricatures of George Brandis, Julie Bishop, Corey Bernardi, and Kevin Andrews, among others. These individuals are all, I suspect, pretty humourless in real life, so any attempt to satirise them must be considered an honourable initiative, regardless of the end result, which was mixed.

Malcolmus himself, however, fails to put in an appearance, not just in this segment, but for the entire show, which is surely a first for the Revue. Mal might be a spectacular dud on a number of levels, but as a sitting PM to warrant only a couple of dishonourable mentions for an entire show was just a tad harsh and/or lazy, I felt.

The Roman theme also went on for far too long, and I wonder if I was the only one beginning to worry that the whole show was going to be comprised of a bad homage to Up Pompeii – silly names, photo-shopped arches, and even sillier situations notwithstanding.

There was one highlight, when new Senator Derryn Hinch made an appearance as a gladiator at the Circus Ludicrous, where Scott channels his inner Yosemite Sam wonderfully, helped by a great beard and an equally silly costume.

Once we finally escaped Rome, the show resumed its regular format with generally better results. Drew Forsythe was brilliant as Pauline Hanson, ably assisted by Gardiner’s Jackie Lambie and Scott’s Brandis. Yes, they’re the most obvious targets for a show like this, but there was something endearing about these particular caricatures. Hanson is, after all, as close as we get to a Trump-like figure on the local scene, while Lambie more closely resembles one of his supporters who hasn’t been fed after midnight – she might be as rough as guts but she does sometimes say things you can’t help but agree with.

Carry on Exit was a highlight for me, and fans of the films will love the portrayals of Sid James, Hattie Jacques, Barbara Windsor, and Kenneth Williams as they navigate the post-Brexit reality of travelling abroad and back.

Biggins was also in especially good form, firstly as an unforgettable Tony Abbott complete with red speedo and feathered fans, then as American Major Dick Tingle attempting to explain the situation in the Middle East, and as Henry Higgins trying to liven up Bill Shorten’s oratory skills, which is no easy task.

There was a poignant piece dedicated to Bob Ellis, who died during the year, and it would be remiss not to mention Phil Scott’s ditties, which keep the show humming along. His musicianship is always of the highest calibre and is as indispensable as ever.

Then there was the US election. So much has already been said and done that it was difficult to see what a show like this from across the ditch could add, especially when one of the candidates in particular has done everything humanly possible to transcend satire. Additionally, there are countless impersonations already out there, two of the best being Alec Baldwin on Saturday Night Live and Dana Carvey on numerous morning and late night talk shows.

Having said that, Biggins gives a speech as Trump where he simply reels off a few minutes of the more ludicrous things he’s said over the long course of the campaign, and it worked for me. Moreover, Gardiner’s ‘Piss on my Campaign’ (sung to the tune of Rain on my Parade) as Hillary was genuinely funny.

I notice other reviewers have not been particularly kind to this show, with one all-but arguing that the format’s passed its use-by date. I for one, however, have grown quite fond of this endearing and, hopefully enduring, gem. Yes, this year’s Revue had its weaknesses, but there are still loads of laughs to be had if you can still find a ticket.