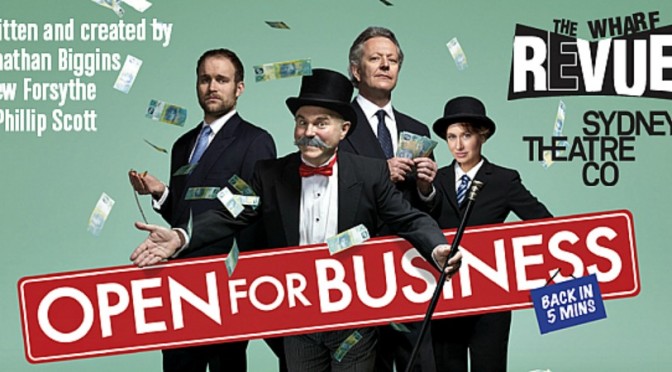 THE OPEN FOR BUSINESS set had a Monopoly board backdrop and floor with a variety of topical squares to land on:- Go To ICAC, Australian Water Holdings, Catholic Church, Slush Fund, Salvos and the Commission Into Union Corruption were some of the tantalising options.

The Wharf Revue follows a familiar format of sketches satirising, ridiculing and lampooning the Canberra politicians and a few other national figures. We were welcomed to the House of Review to the strains of Advance Australia Fair by the speaker, Bronwyn Bishop, played by the fabulous Amanda Bishop, and this was followed by a steady stream of impersonations and ridicule of politicians and media personalities.

The performances by Amanda Bishop and Jonathon Biggins were exceptional and were well supported by Phil Scott and Douglas Hansell. Phil Scott also displayed his considerable skill as a pianist.

OPEN FOR BUSINESS is not the funniest version of The Wharf Revue produced over its fifteen year history but there many amusing impersonations and some hilarious and very clever sketches.

Jonathon Biggins as Bob Brown singing and dancing to Get Back Your Green Thang, Everybody Dance Now was bizarrely wonderful. Inbedded With The Morrisons in which Scott Morrison is in bed with his wife deflecting her questions as if she were a hostile journalist was very clever. Other highlights were a torch song from Miranda Devine and an opera sung in German gibberish but with very funny surtitles.

Paul Keating’s speech to his fellow irrelevant Australians and his dance routine with Julia Gillard was classic Keating at his vitriolic best. Lines such as “the brains of the organisation left when Wilson Tuckey retired” are pure gems. However, a lot of the humour is of the Benny Hill ilk and a fair amount is just an impersonation relying on the audiences’ dislike of politicians.

The show will be touring around for the coming months and by the time it reaches The Wharf (Sydney Theatre Company) in October I expect it to be a funnier more consistent show.