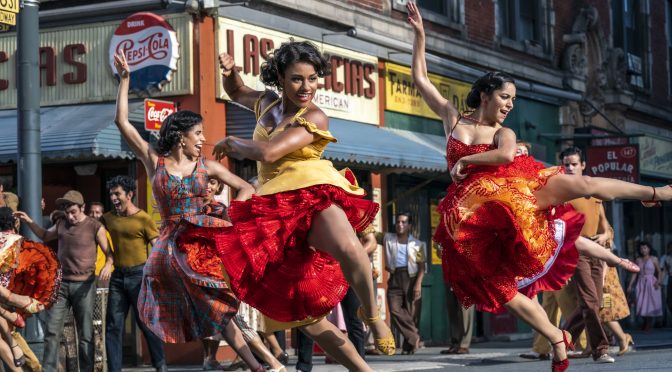 There was no reason to remake it, but Steven Spielberg has remade WEST SIDE STORY, And, as remakes go, it’s pretty good.

Sixty years on from its Oscar scooping film incarnation, WEST SIDE STORY gives a shiny new cast the chance to strut their stuff to Bernstein and Sondheim.

Ansel Elgort and Rachel Zegler are the star crossed lovers Tony and Maria and they are just fine, but the real fire comes from Ariana De Bose as Anita, David Alvarez as Bernardo and Mark Faist as Riff. These three are terrific triple threats – singing, dancing and acting – and deliver triple treats.

Nostalgia zone is fondled by Rita Moreno, who was the original cinematic Anita and was awarded an Oscar for her performance, here plays Valentine, the drug store owner who gives Tony succor.

Leonard Bernstein’s score remains as smooth, savage and striking as a coiled serpent, a woodwind, brass and bongo combo that struts and thrusts, the launch pad and ballistics for the rampaging ballet that makes projectiles of the dancers, lithe and lethal limbs, swaying hips cutting a swathe through the narrative, a catapulting choreography of exuberance and menace.

The opening shot of a west side slum facing the wrecking ball to make way for the Lincoln Centre is signature Spielberg, the rubble redolent of rumble, a war of the worlds landscape. Accompanied by the pulsating Bernstein overture it makes thrilling cinema.

It could be argued that WEST SIDE STORY is a musical for people who don’t like musicals like Carmen is an opera for those who don’t dig opera. Steven Spielberg’s take on this timeless work is for people who like movies – colour, movement, characters and emotion.