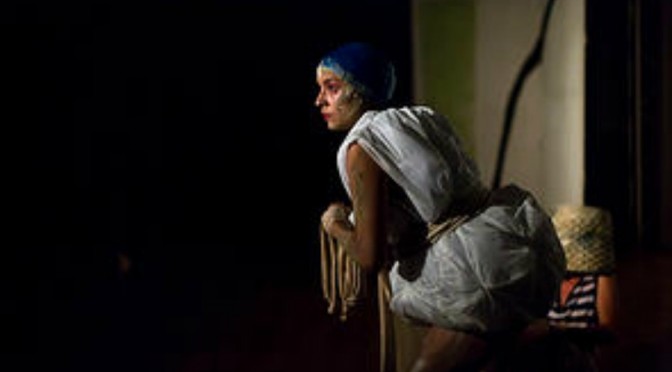 It’s the raw redness of it. The pain when it stretches. The spasms and contractions in the slow twisting to find an elusive comfort. The joy during the hours of creation long gone, the sunburned characters who populate beside, around, in and under the water in WE, THE LOST COMPANY paroxysm in front of us. The water soothes them and the echoes of water, the spit of a splash or the contemplative music of a lap pulls the unbidden memory from an audience transported in the observation of beauty.

Inspired initially by the canvases of Brett Whiteley’s beach series in which the human figures range from sand ridden to sun reaching, this work from the Clockfire Theatre collective delves into the human relationship with water. The work also draws on Whiteley’s admiration for Yukio Mishima who is more remembered in the West for his ceremonial seppuku death than his work. The Japanese connection is further explored with references to the 2000 year old tradition of the Ama Pearl Divers.

The bodies and the movement of the three artists MADELINE BAGHURST, ALICIA GONZALEZ and ARISA YURA is at once the water in a receptacle yet also the receptacle for the water. The wicker covers their head or is lifted to pour the invisibility of clear liquid over them. Their bodies lie curved like a shoreline or erect as the sand heats their feet. They have about them the silence of the burned and the one verbalization, the unintelligible railing at the sun, strikes the ear.

There are other words though. Words that flow. Voices and stories. Stable and relatable, the variety of the verbatim interviewees on the soundtrack ground the theme. Yet the soundscape which foregrounds the water tales never allows the audience to slip from the moment like the girl, now elderly, who is still scared of the water. Composed and arranged by BEN PIERPOINT, it is pure in the single note piano or lush the depth of the rising strings. A crackle of electricity which mixes not with water, hits the performers and they are lost and crawling as the soundscape buffets them like waves pulling them further from the safety of the woven reeds.

The ensemble nature of the creation process gives the work it’s clear and distant longing and Director EMILY AYOUB, assisted by KATE WORSELY have bound the movement, music and voice-overs together without any cacophony.

With a production design by AMANDA McNAMARA which starkly flows and lighting which responds to the work with the yellow of a low lamp and the ever so slight blue of water seen shallowly, an audience can get lost with the company. WE, THE LOST COMPANY have left time for the audience’s Dreaming in the dark or the light of the empty stage. It is a fluid and transformative experience.

WE, THE LOST COMPANY continues at the new Old 505, Eliza Street Newtown Tuesdays till Saturdays until 31 October.