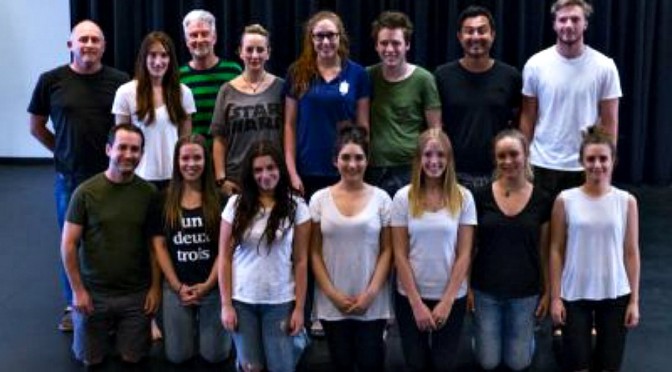 WASN’T TOMORROW WONDERFUL? is an entertaining, fun story of young love with some twists and turns. A collaboration between writer/director Malcolm Frawley and producer Jordy Shea, led to a reviving of Frawley’s 2007 play which was originally staged for Sydney Theatre School students. The play has been revamped for its new cast of 14.

The story is told mainly from the point of view of the bride- to-be Tegan, played with heart and charm, by Josie Walker. On the eve of her wedding Tegan, using a series of flashbacks, and helped by her friends, describes how she arrived at this point in her life. We learn she takes on “lost puppies” and when she hears that Silas, played with true gentleman poise by Stephen Bracken, is being cheated on she has to interfere to save him.

There are a number of sub-plots involving her friends and family which add interest and depth to the otherwise fairly narrative.

Particularly strong and an excellent foil for Tegan’s gentle character is Sarah Westhoff as Chloe, her best friend. Chloe has her own version of the flashbacks and ideas on what Tegan should do. Bass Hathaway very successfully plays several roles especially that of Kelvin, to start with another lost puppy.

The entire ensemble cast, a number of actors playing several characters, work very well together to fill out the story of Tegan and her family and friends. It is not limited to one generation as the stories of Tegan and Silas’ parents expand the plot. A clever addition to the action is Tegan 2, a second version, who argues with the original Tegan.

The characters are also called upon to be part of the set – including wash basins, which adds humour and builds the effectiveness of the set design by Madi McCarthy.

The music, Aron Noakes, is mostly very subtle and appropriate as is the lighting design by Tim Edmond.