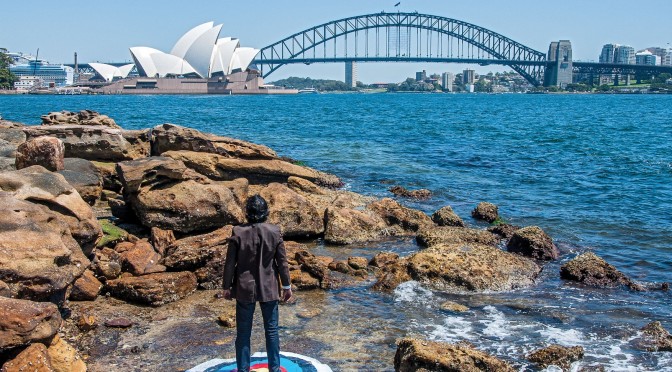 WAR – A Playground Perspective is a FREE exhibition to be displayed for the first time at Newington Armory at Sydney Olympic Park from 10am-4pm between Saturday 14 May-Sunday 14 August 2016 – weekends only.

The exhibition will provide the opportunity for some of Australia’s leading contemporary artists and audiences to seriously examine an aspect of human nature that is deeply embedded in our communal psyche – territorialism.

Curated by Allan Giddy and Nick Vickers of the University of NSW Art and Design faculty, the public exhibition will showcase a variety of thought-provoking paintings, installations and digital media projections by 24 acclaimed artists including Sydney Peace Prize Winner 2015, George Gittoes and official war artists who have served with Australian troops: Shaun Gladwell, Wendy Sharp and Ex de Medici.

“WAR – A Playground Perspective neither condemns nor condones the conditions of war. Rather, the exhibition explores and interrogates perspectives of war,” said exhibition curator, Allan Giddy.

“Sydney Olympic Park’s Newington Armory is the ideal venue for this exhibition. Not purely due to the loaded history of Newington Armory but also because the exhibition shows nearby the Armory’s playground facilities (Blaxland Riverside Park Playground), which offers a perfect counterpoint for an exhibition that has a lot in common with the playground and an underlying theme which is, of course, much more onerous,” added Mr Giddy.

WAR – A Playground Perspective will be staged within the Armory Gallery (Building 18) – which spans 500 square metres and boasts Australia’s largest continuous gallery wall at 38m x 3.5m – as well as within Newington Armory’s Building 20, which is the Armory’s original 19th Century gunpowder magazine.

Once the Royal Australian Naval Armament Depot, Newington Armory features more than 100 buildings dating back to the 1800s, including cavernous armament depots, hidden explosives bunkers, cottages, tiny train stations, groves, glades and a wharf. Each building, bunker and bomb is accompanied by stories that reveal an interesting piece of Australian history.

Sure to enhance the experience of exhibition attendees at open every weekend, the heritage-listed Newington Armory site today serves as an arts and culture hub of Sydney. Situated between the southern bank of the Parramatta River and the suburb of Newington, the site can be accessed via Jamieson St, with free parking available at Blaxland Riverside Park.