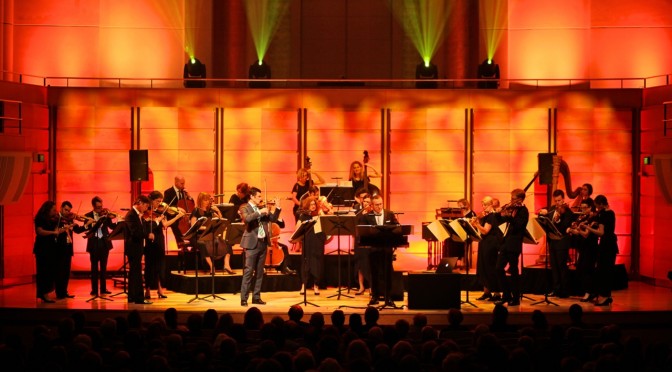 Under the intense, dynamic and energetic direction of Paul Dyer the Orchestra was in glowing form and performed with a rich tone.There were snazzy lighting changes at appropriate points in the programme adding to the atmosphere.

The programme began with an exuberant yet refined and precise performance of Bach’s Brandenburg Concerto No 3 BWV 1048. The piece featured an exquisite, dizzying violin solo by Simone Slattery. With its Baroque flourishes the concerto was performed at a briskly confident pace and led to an exuberant finish .

Next was the ravishing Vivaldi Concerto for Two Violins Op 3 No 8 RV 522 from L’estro armonico. The two soloists, Ben Dollman and Brendan Joyce, were magnificent in their soaring duet, tossing the melodies between each other. The first movement was quite fast, the second more sombre and stately, while the final movement was brisk and insistent and featured dazzling, fiery playing.

Next came the CPE Bach Concerto for Flute in A Minor Wq 166 arranged for soprano saxophone. Bach wrote the piece at a challenging time between the ‘Baroque’ style and the ‘Classical’ and ‘Romantic’ eras that followed.

The featured soloist Christina Leonard wore a stunning long blue dress and played a shiny golden soprano saxophone. Leonard’s playing was impressive and featured blistering cascades of notes, especially in the first movement. The second movement was slower and more melancholic. The third, contrasting movement had a brisk, scurrying opening with the saxophone having a brighter, more slithery sound .

The second half of the programme was the amazing, challenging Recomposed– ‘Vivaldi The Four Seasons’ by Richter premiered in London in 2012. This was its Australian premiere performance.

With this arrangement, new elements are blended with the familiar Vivaldi -a Macbook and Moog synthesiser magically blended with period instruments. The Orchestra was also bathed in very atmospheric lighting.

Some of Vivaldi’s rhythms, themes and structure are used but also updated to now, with repetitions in the bleak minimalist style of snatches of the familiar, original Vivaldi. In the first movement, Autumn, there is a dance of stumbling awkward beat, whilst the finale, Winter, was performed in 7/8 time.

Soloist Brendan Joyce was amazing, with at times shimmering , blisteringly fast passages, contrasted with anguished, sustained notes. The powerful passionate music pulsated and dynamically captivated the audience. This was an enthralling finale.

Recommended, VIVALDI UNWIRED by the Australian Brandenburg Orchestra is playing the City Recital Hall various dates between the 6th and 15th May, and is also being performed in Melbourne and Brisbane