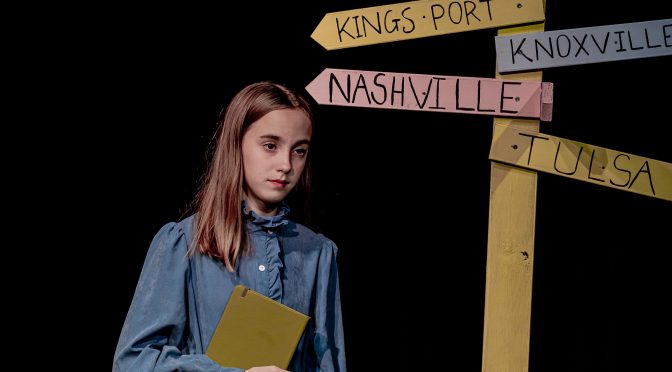 is another of their productions that raises social issues. Body image, skin colour, sexuality and feminism are all gently explored in a touching play that cleverly blends country, gospel, blues and rock music.

VIOLET is based on “The Ugliest Pilgrim”, a short story written by Doris Betts. Set in the 1960s, it follows the journey of a disfigured young woman who travels  from her home in Spruce Pine, North Carolina to Tulsa, Oklahoma in the hopes of being healed by a televangelist. It’s a strange story on which to build a musical, but Jeanine Tesori and Brian Crawley tell it simply and poignantly.

The 1960s was a turbulent time in America. The war in Vietnam, racism and treatment of women frame some scenes. Parental guilt and family resentment lie behind others. All are dealt with subtly in the script and Kathryn Thomas respects this in her direction and her judicious use of the small acting space.

A two-level rostrum becomes a greyhound bus and a gospel choir stage; a stool, a window frame and a bed are the only other props. On this minimalist set Thomas allows the characters to come to life through the natural dialogue, the moving lyrics of twenty songs and the emotional energy her cast of nine have invested in their performances.

Violet has carried a scar on her face since an accident with an axe as a child. The young Violet, played by 12-year-old Taylor Swan, appears in flashbacks throughout the play, giving insights into the schoolyard taunts that she had to face. Swan handles these scenes well, especially when she accuses her father of never admitting responsibility for the accident. She has a sweet, clear singing voice that blends beautifully with the more mature voices, especially in “Down the Mountain”, her duet with her father (Trent Gardiner) and “Look at Me” which she sings with her older self.

That older Violet is played perceptively by Chelsea Taylor. She shows an insightful understanding of the character in a very realistic and but understated performance. She has ‘contained’ Violet’s past, understands the decisions she has made, and clearly shows the practiced confidence and optimism with which she faces the long journey to Tulsa. Taylor has a carefully modulated voice which she uses expressively in her songs – especially “Lay Down Your Head”, and her duets with Flick, Monty and her father.

Lindford Gilmour plays Flick, the young, coloured soldier Violet meets on the bus. Gilmour is an experienced performer who uses his strong voice effectively, especially in “Let it Sing” and the more moving “Hard to Say Goodbye”. The Flick he portrays is gentle, considerate, self-reliant, a strong person who carries the burden of racism and underprivilege with quiet strength.

His fellow soldier, Monty typifies the confident, privileged ‘boy next door’ who is unaware of his over-confident brashness. Tommy Green finds all of this in a buoyant performance. His Monty is bright, cheerful, and almost, but not quite, too self-assured. He has a strong voice which blends well with those of both Taylor and Gilmour.

Trent Gardiner brings a wealth of experience to the role of Violet’s father, a widower with the burden of bringing up his daughter alone. Gardiner shows the weariness and weight of this in a moving performance, especially in a scene with young Violet and when he sings “That’s What I Could Do”.

Ten smaller roles are played by the remaining four performers. Though small, the roles are quite challenging  because of relatively quick character changes and the diversity of age and background the actors need to establish – and the different songs and musical genres they perform.

Miriam Rihani is both a nosey old lady and a hotel hooker, while Lucy Koschel is a vigilant hotel receptionist and a music hall and hotel lounge singer. Sam Howes plays a dodgy, flamboyant preacher, a bored Greyhound bus driver and a radio singer.

Isaac Downey takes on four different roles. In one he plays an awkward teenager trying to chat up young Violet. Not an easy task, especially considering the age – and height – difference in the two performers, but Downey does the gawky ungainliness very well.

All four come together with Gardiner, Green and Gilmour as enthusiastic gospel singers.

Musical director, Stephen Dula, on keyboard leads a small band that moves from genre to genre and tempo to tempo with practised ease. In such a small space, the musicians are very close to the action, which makes it difficult to hear some of the more gentle, haunting numbers. Thankfully the company does not allow that problem to affect the decision to mount productions such as this.

VIOLET combines thought-provoking drama and musical theatre most effectively. Thomas, Dula and the cast make it work just as effectively.

VIOLET plays the Performance3 Space at St Alban’s until the 29th May 2022.