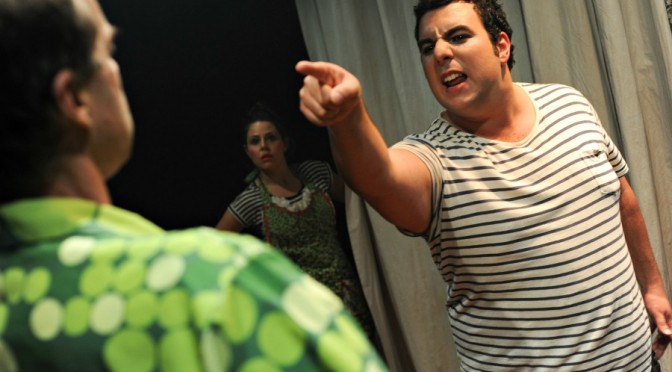 The subject of Finegan Kruckemeyer’s THE VIOLENT OUTBURST THAT DREW ME TO YOU is the turbulent, whirlwind world of adolescence.

The focus is on troubled adolescent, Conor. For Conor, his world started turning upside down when he turned 16. Everyone started getting on his nerves. His mum, his dad, his teachers, even his best mate.

Lately, he hasn’t been able to help himself. He keeps on picking fights, slamming doors, even flipping desks. Conor’s parents try various unsuccessful approaches including getting him to move in with his Uncle and Auntie, in ultimate frustration, his parents dump him alone in their place in the middle of a forest for a week.

This little zinger of a play is well served by Kate Gaul’s very theatrical style of production. There’s a very physical style of performing, a good use of puppetry, lighting and shadow effects, the soundscape works well. Jasmine Christie’s colourful costumes suited the characters well.

The play captures beautifully the freewheeling, zany, adventurous, exuberant and flighty nature of this period of life.

My favourite scene was a wonderfully poetic moment Connor and his girlfriend Lotte are having an argument. Lotte is insisting Connor become more adventurous. Connor decides to ‘follow’ Lotte. The rest of the cast put chairs in front of him that he climbs over to get to her and they continue their adventures.

Recommended, a co-production of the Siren Theatre Company, Griffin Independent and InPlay Arts, Finegan Kruckmeyer’s THE VIOLENT OUTBURST THAT DREW ME TO YOU opened at the SBW Stables Theatre, 10 Nimrod Street, Kings Cross on Friday 20th June and plays until Saturday 12th July. Running time 70 minutes without interval.