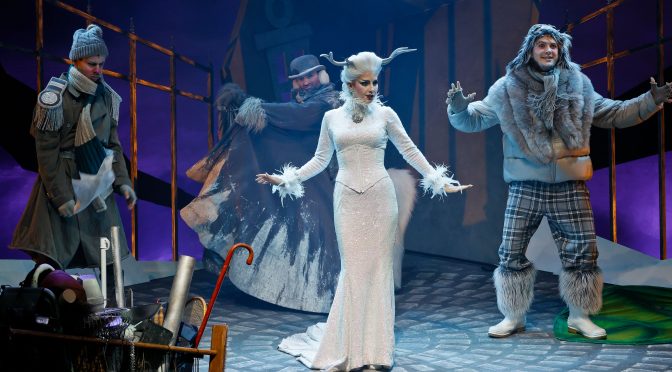 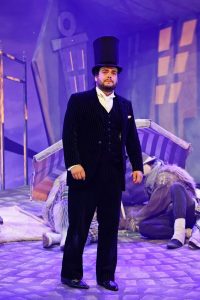 This delightful Green Room Award winning operatic version of Oscar Wilde’s story first premiered in 2019.It has just completed a short season at the Playhouse of the Melbourne Arts Centre and was also available online.

Directed by Cameron Menzies ,Wilde’s story has been slightly changed, but it is still a story about how the Giant changes from gruff melancholy and bitterness, to acceptance, change and growth while also making observations about selfishness , integrity and position in society  .

The opera has an arresting score by Simon Bruckard and a great libretto by Emma Muir-Smith that combine to moving tell Wilde’s allegorical tale.We follow the story of the giant (Stephen Marsh) as he returns from a long visit to find his garden inhabited by boisterous , noisy children playing . Marred by his childhood, and wanting the garden all to himself, the giant startles the children away and installs a large sign No Children Allowed. The next day (Lucy Scneider) arrives with her fairies (Eliza Bennetts and Miriam Whiting- Reilly) to make the garden bloom and grow, in a delightful, rippling, bubbling trio, but something is awry.

The trio are in bright , colourful pinks , yellows and greens and brandish large yellow dusters. The season quickly changes and ice queen Winter arrives (Hannah Kostros in a stunning slinky white outfit , horns in her hair and feathery detail at the end of her sleeves and neckline).She is joined by her entourage of Snow (Joshua Morton-Galea ), Wind (Nick Sheppard) and Frost (Christopher-Jack Andrew ),all rugged up , with ear muffs ,scarves , coats etc. One has epauletes on his jacket and a snazzy iced moustache, one constantly sneezes , another wears very swanky boots .They are searching for somewhere to live and , discovering the abandoned garden , move in , dragging a shopping trolley with them. Years later, children again manage to creep in and play in the garden.The Giant helps one who has caught his foot and he begins to soften and change and consider sharing it. Eventually Winter disappears and Spring returns.

The Victorian Opera Chamber Orchestra as conducted by Bruckard was in fine form.

The set design by James Browne was quite striking – with a raised, tilted platform dominating, with a fence and doors , and The Giant’s ominous house looming .Various props are used to indicate the change of seasons and a large chair for the final scene is placed centre stage .His costume designs were delightful. Lighting design originally by Eduard Inglés , here realised by Peter Darby was most effective..

Stephen Marsh as the melancholy eponymous Giant is superb, in his elegant suit and top hat that emphasizes his height. We feel sympathy for him at times but he can also be menacing and grouchy. Much use is made of umbrellas/parasols – pink and twirling for Spring or grey and cold for Winter … Symbolically one of the Spring trio’s umbrellas is left behind when Winter storms in and at times they look like plant leaves growing.

Kostros as Winter is icily commanding, musically perhaps referencing Mozart’s Queen of the Night with her fine performance.

The Children’s Chorus is full of buoyant enthusiasm, with hand clapping games and skipping .They  also act at times as unobtrusive set placers , with leaves or shards of ice or shifting the chair to centre stage for example. This production features student performers from the Melbourne Conservatorium of Music, University of Melbourne, including students from the Master of Music (Opera Performance), Bachelor of Music (Honours) and Bachelor of Music (Voice).

Choreography by Elizabeth Hill-Cooper is stylised but works very effectively around the somewhat constricted set.

The opera does not quite follow Wilde’s story at the end, rather the older Giant peacefully ‘ falls asleep ‘ in his large chair centre stage , encompassed by the garden’s leaves and flowers the children present to him .There is a gentle , touching air of  acknowledgement and harmony .

A most enchanting opera for all ages .