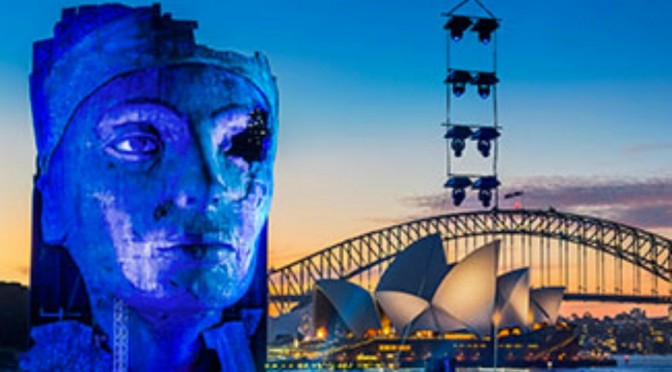 The 2015 Handa Opera season, with an exciting, expressive and modern interpretation of Verdi’s AIDA further enriches the environment of al fresco entertainment in Sydney. The tale of war, religion, desire and revenge evolves on a grand scale with an esoteric mix of old-world objects, fashion and icons with contemporary elements.

The awe-inspiring set’s crowning glory is its eighteen-metre high weathered statue of Nefertiti. At the apex of the raked stage its sombre one-eyed gaze follows all assembled. Set and Costume designer Mark Thompson includes modern items such as forty–four gallon drums, glossy contemporary coffins, and metal staircases flanking each side of the stage.

This opera’s strong focus on war and victory includes royal guards in PVC pants with shiny helmets wielding machine guns. Members of the Egyptian army mount the stage clothed in uniforms from recent centuries. Continued weaving of era references and visual eclecticism is a compelling and novel mix.

The production is a dramatic, visual and vocal treat. The orchestra beneath the stage led by Brian Castles-Onion sounds very fine in both full celebration mode and for thin textures or solo lines. Walter Fracarro’s early ‘Celeste Aida’ aria penetrates our hearts, the still Farm Cove air and sets the bar high for vocal performances to follow. His Radamès is tragically passionate and a fine example of the military man serving king and country.

Stunning in an African-inspired outfit is the slave Aida as played with great emotional range and physicality by American soprano Latonia Moore. Her focused performance shines when playing Radamès’ secret lover, as daughter to her captured father or servant to her rival the Princess Amneris, who forms the third stellar peak of this self-destructing love triangle.

All voices thrill and survive the necessary amplification to blend well with the orchestra and maintain the many nuances of their contrasted characters. As throughout her role, Moore’s delivery of the aria ‘O Patria Mia’ is an emotional roller coaster, a complete blend of vocal delights and visceral energies.

If this opera is said to deal with the conflict between Egypt and Ethiopia and the confused human detritus of this and any war, then the character of Amneris (Milijana Nikolic) is certainly a figurehead for the Egyptian nation, representing the side of any war which exudes power and confidence in their country’s tactics and resolve.

Milijana Nikolic’s lower mezzo soprano register is as rich and commanding to the ear as the textures and composite designs of her several costumes are stimulating to the eye. Switching from outfits dripping in gold to an old-world style gown in more modern azure for her attempt to save Radamès (‘Labborrita rivale a me sfuggia…),this side of her character is as fully explored as the predatory Egyptian femme fatale pervading other scenes.

In a victory display that is ostentatious, proud and crowded across the stage, we see the human and material spoils of war then are even treated to cameos from live animals. The colourful party joyously extends beyond the stage in this roofless theatre as that famous march is blasted on trumpets. This is a formidable celebration of one of opera’s most formidable celebration scenes.

Such a theatrical scene is a true highlight of the effective direction of cast and effect by Gale Edwards for this outdoor production of AIDA. There are however many highlights of this many-faceted display of opera in this wonderful Sydney Harbour setting. AIDA plays at the Fleet Steps stage, Mrs Macquarie Road until 26th April.