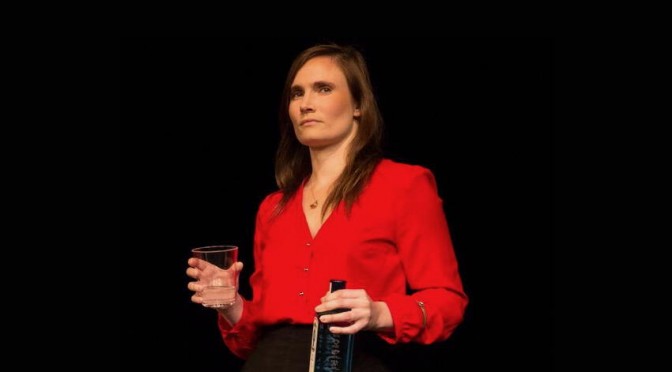 With Pete Malicki’s V.D. (the work was originally a multi-award winning Short and Sweet piece) be prepared to spend an amazing seventy minutes of pure comedy magic, as you experience this witty woman’s endless cringe-worthy disasters, as performed by Eliza St John.

Perhaps for some there will be moments of uncomfortable recognition from one’s own dating mistakes, and dating mistakes that one would be happy not to have made. There also some very important life lessons to be learnt, such as that fate and destiny are both of one’s own choosing.

Sophie (Eliza St John) admits to being a cat-oholic, who whenever she is single on Valentine’s Day, buys another new cat. When we first meet Sophie she is already the proud owner of ten cats. Malicki’s show take us into the world of single 35-year-old Sophie, whose lonesome life is aided by large amounts of gin, She still tries to find love in many unusual places.

Eliza St John, is one of the very few talented actresses, who uniquely are also a wonderful chameleon, who inhibits every role she performs, and makes each character, new and fresh plus passionately alive in your mind. I have seen her as a bright red devil, a serial-murdering dragon, a fast talking chess fanatic . . .

As Sophie, she yet again owns and inhabits the role of this character and the audience ‘buys’ that she changes moods almost as often as she does costumes.

Whilst many theatregoers might anticipate where this play is going, as each episode unfolds, there are many shocks and surprises ahead, with this extremely clever and witty monologue, delivering again and again. The play starts with the receipt of anonymously delivered flowers for Valentine’s Day, but are they from her mother, her boss, her last lover, or a mystery stalker?!

Our Sydney based Eliza St John has worked in the USA, Australia, UK, India, and will be performing the V.D. show to the inhabitants of Brighton England, United Kingdom at the Brighton Fringe Festival  in May and June 2014 ( 30th May at 19:30 and 1st June at 19:15 – http://www.vdtheplay.com/ )

The world premiere of Pete Malicki’s reworked piece V.D. played at the New Theatre, 542 King Street, Newtown Tuesday 8th and Wednesday 9th April 2014. Further encore performances will take place again at the New Theatre on the 7th, 9th and 10th May 2014 at 7.30pm. http://newtheatre.org.au/v-d/ Try and catch it. Highly recommended.