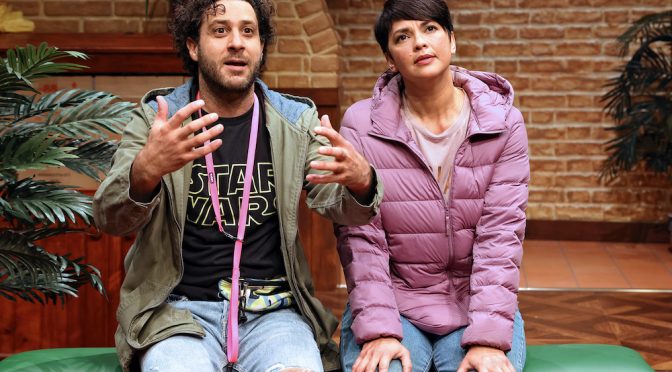 I have been trying to pin it down in my mind as to what Vanessa Bates’ new play THE ONE is about, well mainly about. My best take is that it is about coping, how we cope with the challenges that life throws our way, and that great human trait, the ability to push on.

The play has two main characters, grown up siblings Mel and Eric who are mixed-race Malaysian-Australians. We learn that they have never felt truly at home in Australia or in Malaysia. Growing up they had to deal with racism and bullying.

As kids they were a ballroom dancing couple and they won a big competition. Whilst Mel was on ‘the dias’ waiting for her brother to receive the trophy, Eric was being beaten by thuggish kids in the car park.

Growing up, their parents were divorced, and they were brought by their domineering mum. She disencouraged them from contacting their father and now as adults they are wanting to reconnect.

The dramatic situation that the play starts with is that their mother Helen is returning to celebrate her birthday at Jimmy’s Chinese restaurant where the family spent many a happy time. Both Mel and Eric are very anxious about her visit. They go to the restaurant to make sure that things will be ok for their mum. The restaurant has gone downhill over recent years and the owner/waitress/cleaner Jess is very uptight and unhelpful. Another big concern is that Helen has left her much loved dog Fifi in their care. Fifi is hard work, and they worry that their mother will be satisfied with their care.

With the shadow of Helen’s visit hanging over Act 1, we are fully prepared for the family dinner at Jimmy’s restaurant that is the basis of Act 2. During the interval we see stage hands setting up the round  dining table.

The play features flashbacks to earlier times as well as flashbacks to times they have spent in Penang are interspersed with life in suburban Sydney.

With its tightly knit structure, some big themes and Darren Yap’s clear direction THE ONE is an engaging night at the theatre. It was refreshing to see such a culturally diverse mix in the audience. It isn’t before time!

The  performances are good. The very experienced Gabrielle Chan is cast well as the controlling, sanctimonious mother Helen. Angie Diaz as her daughter Mel and Shan-Ree Tan as son Eric give good performances with a few surprises in store for the audience. Damien Strouthos is very good as Mel’s easy going husband who Mel describes as being  as comfortable as ugg boots. The cast  is rounded out with Aileen Huynh giving a good comic performance as Jess.

Vanessa Bates’ THE ONE is playing the Ensemble Theatre, 78 McDougall Street, Kirribilli until the 27th August, 2022.

Featured image : Damien Strouthos and Angie Diaz in Vanessa Bates’ THE ONE at the Ensemble Theatre. Productikon photography by Clare Hawley.