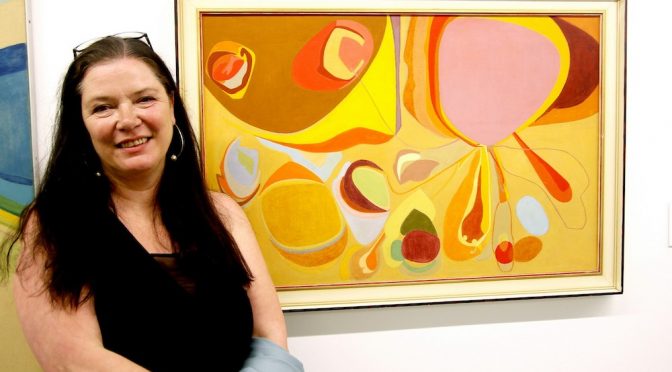 The Rainer Hof Gallery at the National Art School was the setting for the opening of the exhibition of Valerie Marshall Strong Olsen’s work entitled A Rare Sensibility on Thursday 18th November, 2021.

Rainer Hof was the artist who did all the sculptures for the State War Memorial. During the 1930’s what is now the Gallery was his workplace studio.

The opening was special for two reasons; the Minister For The Arts, Don Harwin MLC announced a $20 million grant for the National Art School which was gratefully acknowledged by the Director and Chief Executive Officer of the School Steven Alderton. It was also a long held dream of siblings Louise and Tim Olsen to hold a retrospective of their late mother’s work. They were assisted in the compilation of this exhibition by curator Kylie Norton.

While she was alive Valerie Olsen, despite the urging of her children, refused to hold an exhibition of her work. Perhaps it was out of modesty or perhaps she did not wish to step out of the shadow of her then acclaimed artist husband John Olsen.

The two met at the National Art School in 1961 and married a year later. As Tim Olsen remarked he was her teacher and she was his student. If the Me Too movement had existed at that time, Tim and Louise may not have existed today.

Despite Valerie’s desire to keep her artistic endeavours private, she did give away paintings to her friends and she did enter the annual Wynne Art Prize for landscape.

However she could not bring herself to sell any of her paintings. The siblings also noted that she was completely devoted to her art and would sometimes take a magnifying glass to examine the minutiae of the landscape when on a bush walk.

There was a tradition of Australian male artists who sought to conquer the landscape in their paintings.

Valerie Olsen revealed the feminine side, as she let the landscape come to her as a revelation.

The children would occasionally wake up in the middle of the night and could hear their parents enthusiastically discussing the philosophy and practicalities of art which was a great source of comfort to them.

When she was dying at the St Vincent’s Hospice she was pleased that she could see from her bed the National Art School where her passion for art was kindled and continued thereon.

A handsome catalogue of the exhibition can be purchased which aside from finding essays there can be found family photographs of the Olsens and their children, some photographic portraits of Valerie Olsen as well as a collection of plates of paintings in the exhibition.

The exhibition is on at the National Art School until 27 November 2021.

Also on show at a nearby venue at the National Art School is John Olsen’s ‘Goya’s Dog’  which concludes on the same day.