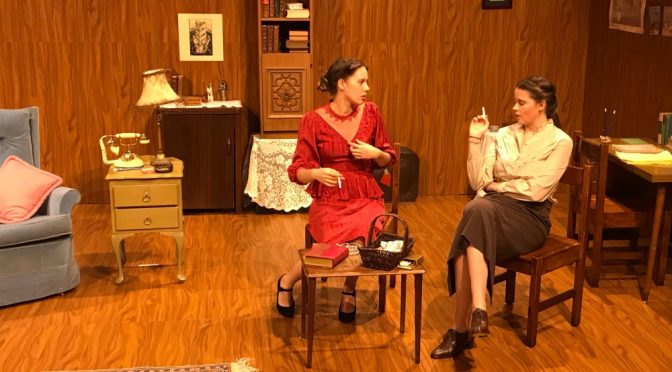 Hellman’s play premiered in the 1930s and was radical for its time in its depiction of a lesbian relationship.

The setting is a country town boarding school. Two female school teachers, Karen Wright and Martha Dobie, have formed a close relationship, building the school’s reputation and importance in the local community. Their feelings turn/transform into more than friendship.

Their relationship is exposed by Mary Tilford, an enormously bratty schoolgirl who ‘dobs’ them into her grandmother, Amelia Tilford, who then ‘rings the alarm’ in the community. The 1930s weren’t exactly a great time in regards to enlightened thinking around the whole issue of same sex relationships!

Eighty years on, THE CHILDREN’S HOUR is still a striking drama. For a while during the show I thought I was watching Arthur Miller’s The Crucible, with the conflict in both plays being  generated and driven by demonic, controlling girls. One suspects Arthur was more than a little influenced by Lillian’s work.

One has to say that Jake Bayssari’s production could not have had better timing, opening on the day of the announcement of the Yes vote winning  the same sex marriage plebiscite.

This was a strong student production, albeit a little heavy handed at times. Bayssari played the show in period with good detail in  costume and set design. The main features of the living room set was a powder blue velvet sofa in Chesterfield style.

There was plenty of warmth and sensitivity in Joseph Cardin’s portrayal of Dr Joe Cardin, a well respected physician in the local community, who is put in a difficult position, being Mary’s cousin as well as being more significantly, Karen’s fiance.

For me, the play’s most telling scene was when Martha shares with Karen her surprise that the bratty Mary could find  that ‘ounce of truth’ about their ‘friendship’ in her mean spirited accusations.

THE CHILDREN’S HOUR had a sadly too brief run at the Bon Marche Studio, playing just between Wednesday 15th and Friday 17th November, 2017.