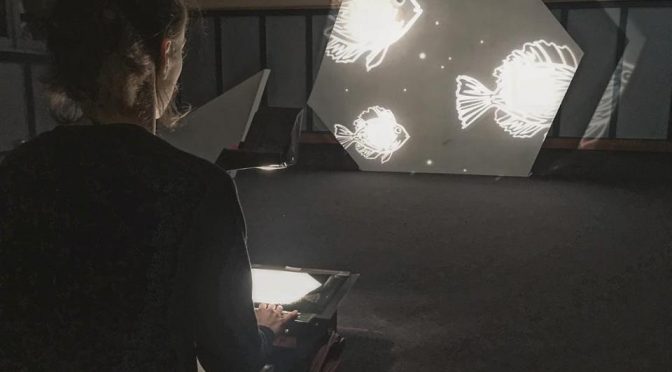 URZA AND THE SONG IN THE DARK is exactly what I always expect from Matriark Theatre – Artfully analogue, handmade, bespoke excellence in design and execution.   It’s a wonderful production which is bursting with humanist joy, the visualization of the invisible and the evocation of sung landscapes of soul.  Designed for children, this detailed yet easily portable production, engages young and old with puppetry, shadow work and original music combined a story of myth,  meaning and much mirth.

The spirit of the hill, the song spirit, is broken and the stones of its shadows are all that is left.    The humans mine and crush the stones for their power to light the town, with no thought to their real meaning or purpose.  Urza is one of the best miners at Tickett’s factory and she has ambitions to be ‘Chief Digger’ until her world is shaken and she finds herself led by a spirit boy who has chosen her for an earth shattering task. She is lost in an underground place that is very, very mysterious,   Urza crawl and fly as she experiences many adventures on her way to loving the earth and all the song stones that make it special.

As the title character, Madeleine McWilliam, gives a conflicted feel to very loving Urza early on so that her character’s growth into feistiness and awareness of her own desires is easily appreciated by the kids.  She’s a heroine to root for with a classically lethal cartoon fightback technique which is such great fun.  McWilliam hits just the right note physically, the swimming scene is balletic and sinuous and discretely skilled such that the littler audience were mesmerised and the slightly older unable to help pointing and whispering to the grownup with them.

Drew Wilson, is the other actor and he plays several roles with great skill, delineation and really terrific engagement with the audience. The characters are cleverly distinguished and his stagecraft is flawless, especially the bowler and brolly section with the black fabric.  He’s very busy with absolute aplomb.  And he does a wonderfully comic tantrum that is hilarious and … oddly charming.  The kids loved it so much!

Narratively, the show is very easy for the little ones to follow and the direction from Scott Parker keeps their attention with a variety  of purpose in the scenes and a gentle transmuting of emotional states.  From the intriguing and mysterious underground sequences to the lyrical wistfulness and pizzicato of the flying machine scene to the very funny domestic scenes, there’s so much to see.  The smaller kids sitting as close as they can to the action and the older sneaking to the aisles so as not to miss anything.

The simple setting eschews traditional shaping and yet there is an emphasis on straight lines here which is echoed in the very many images which are projected.  Projected in a way we are no longer used to… Overhead Projector.  Laser detailed in line and edge, the thrown shadows interact with the characters, Dad plays tunes on the briefly visible hanging kitchen pots, and the images’ superb rendering is matched by the precision of their interpolation into the narrative.

Also splendidly curated are the filmmaking elisions between images, for example, Urza reaches up and pulls down a blind and we have a cinematic ‘wipe down’.   But these images are not ensnared by any sense of screen, they will often fall outside the simple set to show the stars above and the back projection is as effectively used as the OHP slides.

As with all Matriark creations, the music (Kathryn Roberts Parker, who also plays live and co-composer Roman Benedict) is integral, non- intrusive and fantastically created with each recurring sequence having a recognizable theme, like the speeches which have the click, click staccato of an old typewriter.  The boyspirit speaks in a violin note which vibrates so cleverly in length and pitch that we hear what Urza hears as she speaks it back to us.

None of the songs are too long or padded with repeat choruses.  There is one 30sec section in the pool that is a yearning paean for the lost and alone.  Beautiful!  And the Urza triumphant song with its old fashioned accordion texture imposing on the impelling drum scape that precedes and surrounds, is just delicious aural enjoyment for the adults.  The whole show, designed by Aleisa Jelbart and devised by Matriark and the Ensemble,  will keep both big and small entertained for its whole 60 minutes right up to the toe-tap Irish Reel sting toward the ending.

I can’t praise this production enough.  I just adored it! Unfortunately I did get to the show late in the season and URZA AND THE SONG IN THE DARK  has now finished its run.

However, Matriark Theatre [Facebook]  are raising funds so the show can take its life affirming beauty to community spaces and libraries and halls all over the country, beginning in 2019 at City of Sydney Libraries.  You can see more details at  the Australian Cultural Fund . Give them a few bucks please, it is such an investment in a better world through artistic vision and skill. 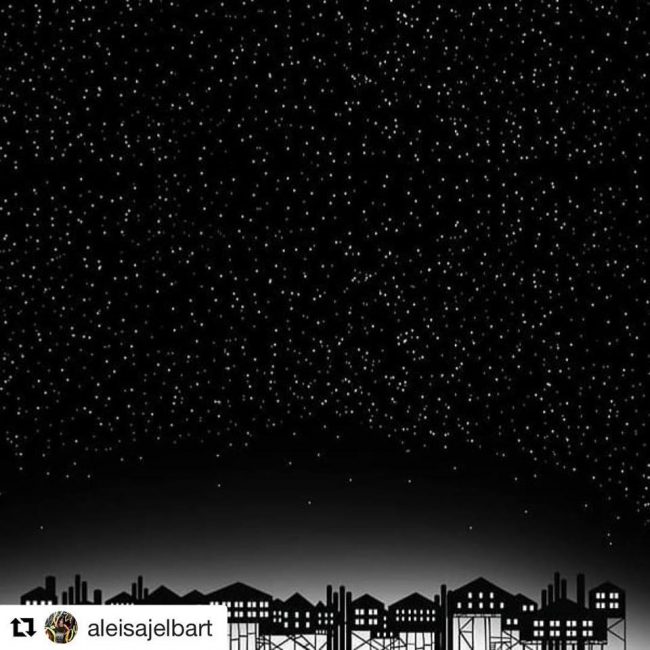