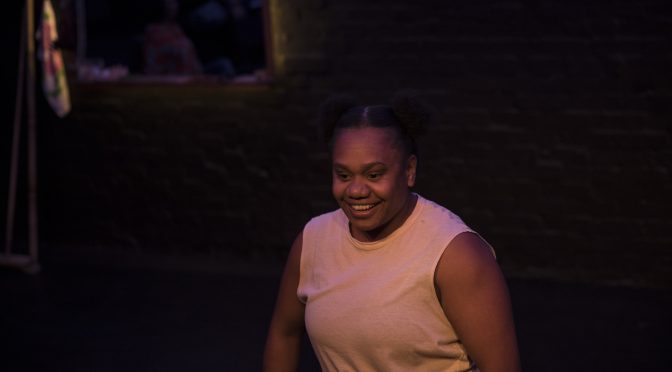 In wordless depiction that becomes clear by repetition and the inclusion of simple English, we learn Ghenoa’s place in her family’s hierarchy. Fourth child, second daughter.

A Torres Island family living in Rockhampton, Ghenoa’s parents are determined to keep their culture alive and impress a strict regime of daily dance practice. Perceived as a chore between chores and school and prayers, it becomes a passion.

Like most adolescent girls, she dreams of breaking away from her small town and making a bid for some kind of stardom in the big city. Away from her family and roots, she embraces independence but also grapples with identity – racial, sexual, and cultural.

MY URRWAI has an audience participation component, but this aspect of the show is much more poignant than merely a parlour game. Ghenoa invites people on to the stage to “be her.” This role playing is benign and funny to begin with – there’s a glorious scene re-enacting her first  purchase of a pair of ballet shoes where the shop assistant is befuddled by her first “aborindigenous” customer – but there are darker hints with benignly bullying teachers literally renaming her and the dread making malignant racial profiling she endures at the hands of the police.

Ghenoa is such a cheerful, charming, cheeky cherub, her mere presence warms the space as she navigates the negative of the black fella experience with an accentuation of the positive that comes from a strong family base that has instilled love and a strong sense of self respect.

Deftly directed  by Rachael Maza  with dramaturgy and movement by Kate Champion, MY URRWAI is exquisitely simple storytelling of immense meaning and purpose, engaging, entertaining and enlightening.

MY URRWAI is playing downstairs at Belvoir Street until the 4th February, 2018. Performances Tuesdays and Wednesdays at 7pm, Thursdays and Fridays at 8.15pm, Saturdays at 2.15pm and 8.15pm and Sundays at 5.15pm.