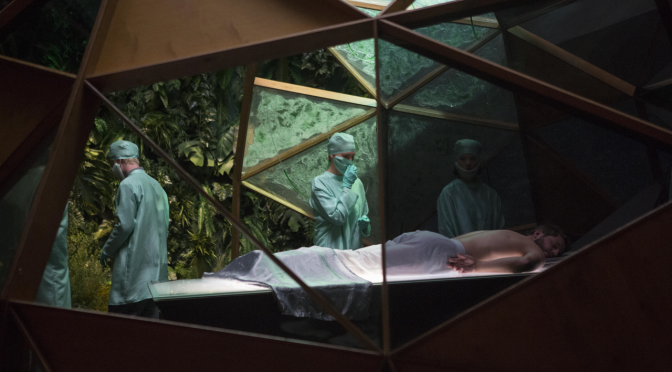 UPGRADE is a kinda kinder revenge tragedy, techie, actiony sort of film.  From this description, it is obviously not a film to fit neatly into a genre.  Instead, it fits squarely in one box … highly entertaining.  There’s also love story, dystopia and science fiction in there.  And very high on the list of why the film is much more that the sum of its parts … a really accessible conversation starter about body autonomy.

In a not too distant future, Grey Trace (Logan Marshall-Green) loves his cars.  Real cars, get under the hood and get greasy cars. He does them up and sells them.  Technology isn’t for him and the self-driving, computer controlled state of the art vehicle used by wife Asha (Melanie Vallejo) is a constant source of playful amusement for Grey.  When Asha is killed and Grey is paralysed in an accident involving this car, his loss is all consuming.

That is, until he is offered a new piece of tech by rich, elusive, mysterious whiz kid and former customer Eron Keen (Harrison Gilbertson).  The implanted tech, STEM (voiced by Simon Maiden), can not only take over Grey’s body reversing his quadriplegia but give him superhuman strength.  With his new physical abilities and STEM’s connectedness he sets out find Asha’s killers without tipping his hand to his mother Pamela (Linda Cropper) or the detective assigned to the case, Cortez (Betty Gabriel).

Writer/ Director Leigh Whannell has created an intelligent sci-fic action thriller with wide appeal …so wide that it would serve a fun date night film.  The entertainment value begins with world building where there is a seamless integration of tech and graphics into the story, with the many domestic improvements just some of the touchless gadgets to put on a wishlist.  There is detail everywhere too.  In a bar called Old Bones, each of the diverse clientele is deliciously drawn in anticipation of a pause button when the film releases to streaming.  But this is a big screen film, see it first in a cinema.

Especially for the wonderful and frequent drone-view shots.  The drones are always watching and their intrusions supplement the dystopian feel of the steely blues and pointedly used reds which are allied with the shadows which often obscure parts of faces.  And the superb audio.  I loved the use of silence in places as much as I did the low, industrial drone that underscores at important moments in the film.  The action and bloodletting is not too loud and the creepy use of choir and organ that accompany Grey’s resurrection is powerful evocation.   There are some very cool sets as well, the hacker’s hallway just one.  Watch out for the Resistance graffiti details too.

UPGRADE’s story rockets along with really well-crafted action sequences …  ‘lock and load’ will never mean the same as it did.  Add to this that Logan Marshall Green is everything one wants in a leading man.  He is believable as a lover, in complete command of the physicality of Grey’s changes of state and when Grey finds himself conflicted late in the story, Green delicately endows him with the vulnerability of the trapped.  Also shining in a pretty terrific cast is Betty Gabriel whose hard graft, logically examine the clues detective is a very engaging character.  Gabriel gives her persistence and an old fashioned, horse and carriage methodology without losing the brio and balls to get dirty in a fire fight.   She’s pretty kick-ass actually!

I loved the Knightrider feel to STEM, I even got a whiff of HAL as the story progressed!  Early on as STEM and Grey bond, there’s a really enjoyable lightheartedness in Grey’s responses to the voice in his head and the gravitas and personability of the tech is entirely winning.  Without being overdone, there’s some very neatly placed humour too “Our leg is not working!”.

When and how the chip takes over Grey’s body, though, has wider implications.   The stimulation of having a great driving home discussion is just one of the reasons why I reckon it’s a good date night film.  There gore and some gross but not galore, there’s love but not overly sentimental, there’s action aforethought and a story that holds up.  And it’s made here … shot in Melbourne, edited in Sydney with a whole heap of home grown talents like Cinematographer, Stefan Duscio and Production Designer Felicity Abbott, Stunt Coordinator Chris Anderson.

UPGRADE (Rating MA15+) opens in Australian cinemas June 14 th 2018 and there is an exciting trailer on line, details of cinemas at Madman Films and more information at the official Facebook.