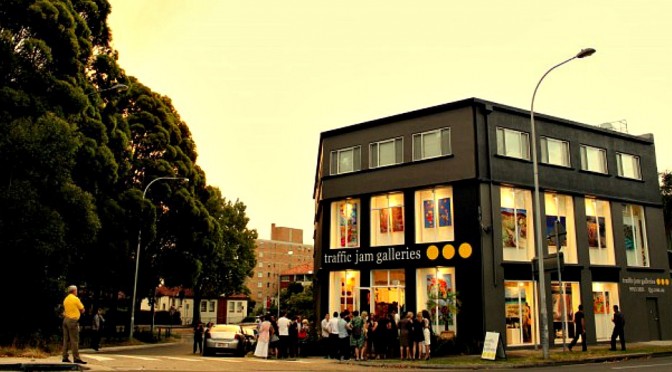 UNTITLED, the current exhibition at Traffic Jam Galleries, focuses on guest artists, foreign to the gallery space, featuring a diverse spectrum of themes and mediums.

The aim of this medley of physical and conceptual forms is to promote a culture of diversity and demonstrate that mixed bodies of seemingly disconnected ideas have the ability to strengthen and support each other.

The exhibition is a thrilling visual feast .          In no particular order –

Steven Durbach AKA Sid Sledge presents  some unsettling works .What is important is the use of pattern and repetition in an almost pointilist way but in Boundary Hunters, for example, there are holes in the ‘ wire ‘ fence – does this mean a search for freedom?!

Building Blocks encourages us to consider building community, recognising and respecting everyone.

Nigel Sense in his works uses bold dynamic and colourful splashes of vivid colour rather abstract in form. His style also features use of words or quotes ( for example,  Art is Swimming With Dolphins or Art is Beef Pies )

Miriam Innes is represented by a striking series of black and white works, charcoal on primed linen canvas, some quite reminiscent of themes from West Side Story – the diagonal fire escapes,  There are some  wonderful port scenes.

Much is made of ominous atmosphere and strong verticals and diagonals in the compositions, all precisely rendered.  Spheres and Grids musing is, by contrast,  rather futuristic floating steel bubbles on a staircase.

Beric Henderson’s works are soft, delicate and starlit- leaves in a forest , swirling galaxies, underwater effects.Some use acrylic and ink on canvas, some a LED back lit lightbox.

If you look closely you can see in some of them hidden figures, for example in  The Eternal Garden – alluding to the Book of Genesis.

Majestic Abyss is calm and cool, and quite mathematical in construction. Bass Hunter and Superfluous Noise, for example, are busy with swirling lines.

Hugh van Schiack’s portraits are gripping and compelling as he seeks to grapple with his father’s cancer. There is a vivid dynamic portrait of his father and also Pain, depicts his father ill in bed having chemo . There are also some very detailed close up drawings of bus tickets and a flavoured milk bottle.

Aleta Lederwasch’s works, gouache and pencil nudes are delicate, dynamic and extremely vivid .Some of the works, for example Woman of the Eucalypt are dreamy in style.

Jessie Pitt’s wonderful, harsh landscapes of snowy mountains, stormy clouds and crashing seascapes are tumultuous and exciting with  a Japanese influence and a striking, dynamic use of composition.

Greg Salter’s three sculptures are dynamic and appear alive. The HUGE, virtually life size camel – made of recycled steel and other materials – is wittily contrasted with the actual title of the work Little Red Bird which cheekily sits on the camel’s back. The goose is just about to chase you and there is an exciting underwater sea creature.

Some works by Shiling Wu who is also a trained professional musician, originally from Taiwan, is included with rolling, swirling sculptures of various combined materials, including raku , porcelain and terracotta.

This was a very exciting and diverse exhibition.

UNTITLED runs at the Traffic  Jam Galleries until April 20.