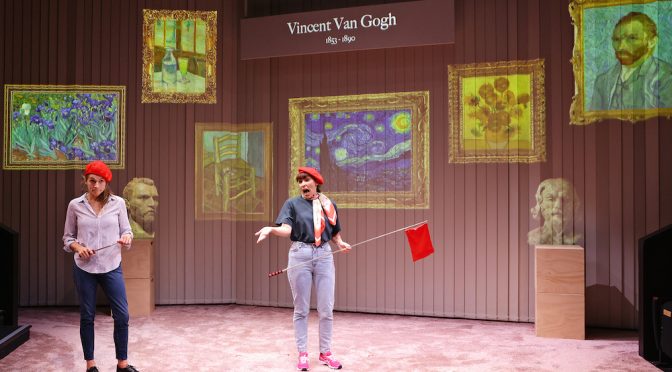 In 2018, the hugely talented Genevieve Hegney and Catherine Moore co-wrote and performed their first comedy show Unqualified at the Ensemble Theatre.  It was refreshingly enjoyable and received glowing reviews.

After years of Covid setbacks affecting theatre and travel, Hegney and Moore are back with their 2022 sequel.  The unqualified, daring ladies of multiple trades – Joanne Trubody and Felicity Bacon – are back.

Now living together and with a new office, they are the only clients who work in their temp employment agency so they take every job that comes in;  ‘Birth Doulas’ (hopefully helping out women in labour), ill informed art gallery tour guides, paralegals fumbling in court, long distance truck drivers, wedding planners and more.

Their scenes are short and hilarious, timing and movement impeccably synchronised, script sharp and witty.  Whilst moving into their new premises,  old family diaries are found – adding insight into the real lives of Joanne and Felicity.

Director of both Unqualified productions is Janine Watson. She has done a fabulous job with this multi-scene play – bringing out the eclectic fast pace and humour.

During several scenes, clever video projections, designed by Morgan Moroney, play behind them, enhancing the atmosphere of their new jobs.

Often talked about on radio, the charm of live theatre is improvisational skills when things go wrong.  The wonderful and complex lighting design by Kelsey Lee was behaving badly as computers often do.  There was a 30 minute break on opening night which the audience accepted brilliantly.  Drinks and water in paper cups were handed around.  The show resumed without another hitch.

I urge you to see UNQUALIFIED 2:  STILL UNQUALIFIED for its sheer ingenuity and ability to make us laugh and laugh constantly.  It runs at the Ensemble Theatre until the 4th of June, 2022.