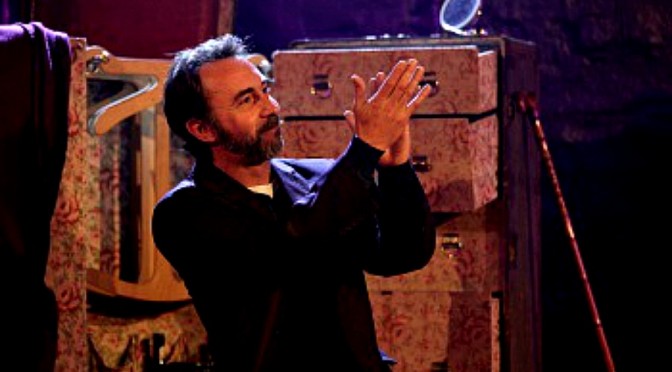 With his new play UNHOLY GHOSTS  Campion Decent has made a  a brave call. He has gone the way of some of the great dramatists by putting his dysfunctional family of origin, up there, on centre stage, for all to see.

Eugene O’Neill could not bear to see his nightmarish autobiographical work, LONG DAY’S JOURNEY INTO NIGHT, performed whilst he was alive. His masterwork first saw the light of day  when it was first published three years after his death. Actually O’Neill wanted the public to wait 25 years after his demise however his wife, realising the enormity of this work, arranged for its earlier release date.

The playwright was there on opening night to see his work premiere. What an experience for him to go through- so raw on one hand, on the other cathartic, to see James Lugton play himself so well, and his Unholy Ghosts, his late parents, brought so vividly to life, by two of our finest actors, Robert Alexander and Anna Volska

They had made life very difficult for him. His right wing, antagonistic father never accepted his son’s homosexuality. His actress mother was a self obsessed, hard living lush.

Then there was his younger sister who died tragically young in suspicious circumstances. We never get to meet her on stage but she is another ghost that haunts this play, and Decent’s life.

At the end of the performance the cast were greeted with very enthusiastic applause. Decent joined the cast on stage for their final curtain call.

He had survived the night! A night of strong drama but the ending spoiled it for me …I don’t believe in happily ever after especially when it comes to families of any description…