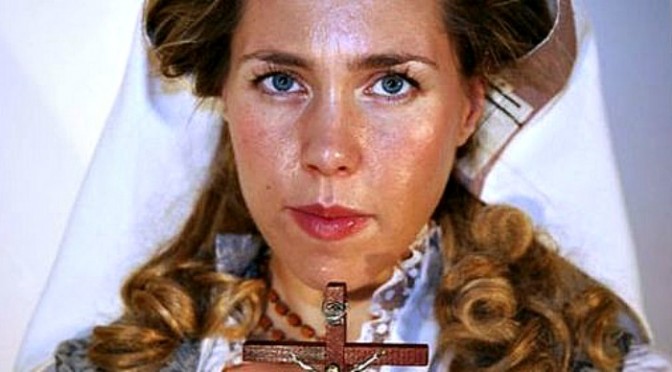 Factory Space Theatre Company’s production of AN UNEXPECTED EXECUTION by Emma Wills is a powerful & dramatic presentation of the last part of the life of Mary Stuart and the political dealings of the English court under Queen Elizabeth.

This adaptation is based on the play MARY STUART by the great German playwright Fredriech Schiller. The evocative language, uniformly strong acting and inventive set bring to life what could have become a dry history lesson. As the writing, lyrical in parts, bitter in others, gradually reveals the historical aspects of the story, the drama and tension build, particularly during the second half, to its deadly conclusion.

Michela Carattini as Mary Stuart portrays with strong emotion a woman who has lived life but carried out some evil deeds in the name of love and power who finds herself denied all freedom. Dimity Rafos as Queen Elizabeth forcefully shows a woman intent on her duty yet yearning for love. The Queen is caught in her power not knowing who to trust but also using this power ruthlessly. This all intertwined with the religious battle between Protestants and Catholics.

Melissa Kathryn Rose as Davison humorously adds some levity to the play yet in the end is a tragic victim of her position at court. Samantha Beames as Hanna gently fulfills her role as Mary’s faithful servant. Deb Mulhall plays with dignity and poise the character of Paulet, Mary’s jailer. Daniel Csutkai slides easily into the role as the sly, sleazy Lord Burleigh, and Roberto Zenca as the Earl of Leicester passionately confronts his own treachery as he swings from supporting one Queen to the other. Ross Scott is very solid as Talbot. Luke Middlebrook as Mortimer effectively develops the character from an idealistic supporter of Mary to uncontrolled passion and ultimately self-destruction.

The inventive set, which uses the first few rows of seating as Mary’s prison (designed by Roz Riley and Deb Mulhall), the fairly simple yet cleverly designed costumes by Suzanne Hauser, and the lighting and soundscapes all add to the atmosphere and mood.

Roz Riley clearly directs her actors to a make this an intense and gripping production. Recommended viewing, AN UNEXPECTED EXECUTION is playing the Star of the Sea Theatre in Manly until July 19.