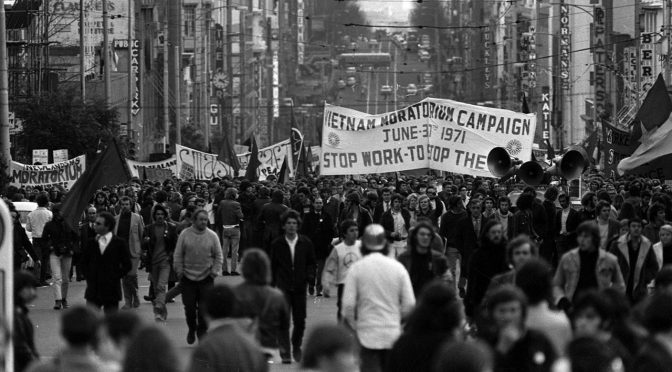 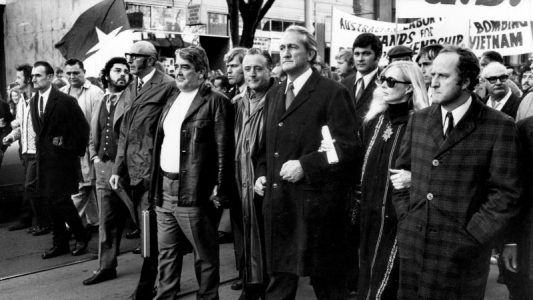 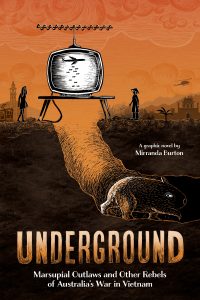 What more relevant contender as an Australian digger is a wombat, that marvellous marsupial warrior, that soil and root worrier, that muscular quadruped adept at tunnelling?

Published to coincide with the 50 year anniversary of the Australian moratorium marches, Mirranda Burton’s epic graphic novel, UNDERGROUND, is a social justice story about the Vietnam War peace movement that, half a century on, has a mournful contemporary resonance.

Ten years ago, Mirranda Burton took up a two year artist in residence gig at Dunmoochin, Clifton Pugh’s former studio. It was there that she learned of Pugh’s wombat, who was registered for Australian military service in Vietnam in 1972.

This absurd bit of political protest prodded the author to dig deeper into the anti-Vietnam war movement in Australia yielding narrative and pictorial pay-dirt.

Verbatim accounts range from a returned serviceman who survived a tour of duty and whose experience encouraged him to renounce Australia’s involvement in the conflict to a Saigon school girl who later became a refugee settled in Australia.

There’s no irony deficiency in UNDERGROUND and Burton mines the embarrassment of ironic riches,with bold black and white illustrations peppered with vibrant reportage.

Prime example: Once there was a munitions factory in the city of Maribyrnong in Melbourne. They supplied the military during World War Two. The factory closed and in 1949 it became a migrant hostel, welcoming refugees of war until the 1980s. In 1983 it became a detention centre for asylum seekers. It closed in January 2019, the detainees transferred to other locations for indefinite imprisonment. What a merry-go-round!

UNDERGROUND – Marsupial Outlaws and Other Rebels of Australia’s War in Vietnam by Mirranda Burton is published by Allen & Unwin.