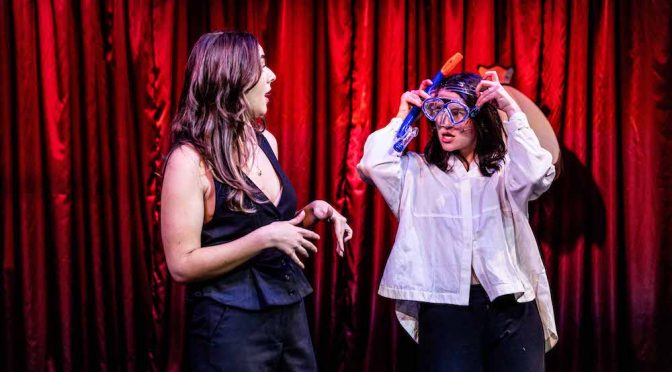 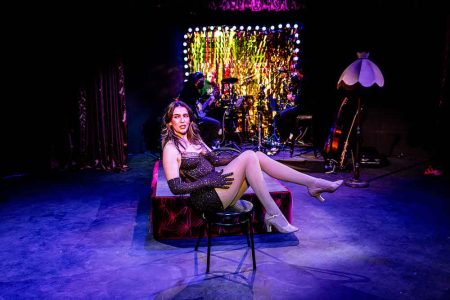 The subject of Lucy Matthews’ musical is polyamory. What is polyamory? Polyamory is the practice of engaging in multiple romantic and often sexual relationships with the consent of the people involved.

Sam and Jess have been in a relationship for nine years. It has been a good relationship however they have been starting to get a little restless and bored. Their love has turned a little ugly, as per the show’s title, with this restlessness. They have a heart to heart talk at the end of which they decide to try having other sexual partners. Just a bit of fun . .

What ends up happening is that Jess finds a new partner in burlesque dancer Lola whilst Sam doesn’t. Jess’s involvement with Lola becomes serious and Sam feels on the outer. Their relationship is on the rocks…

In a perfect world the idea of polyamory is a nice idea. One does have romantic feelings for different people over time. But the outcomes can often be messy as is the case in Mathhews play.

It is interesting to observe that, in many ways, it is the frIendships between characters in the play that seem to work better and are more able to withstand the pressures that life throws at them.

Matthews directs the play herself, a tricky thing to do at the best of times, but it worked out on this occasion, coming up with a good production.

The four actors L.J.Wilson, Lincoln Elliott, Madelaine Osborn and Cypriana Singh gave quality performances, showcasing their acting and singing skills. Osborn and Elliott played multiple roles which mainly worked though I felt that Elliott playing all the male characters didn’t really work. The production would have been aided by another male actor.

Matthews is clearly talented. As well as writing the script which featured a good plot and dialogue that never felt clunky so also wrote the soundtrack which featured twenty appealing songs.

Dom Parker was the Musical Director and led a small group of musos;  Charlie George, Jhoan Sebastian Bautista and Mike Mills – to create a great sound. Just a few times I felt that the band played too loud drowned out the actors.

The staging was simple and effective with just a small table and chair, a double bed, and a large  lamp stand. A  curtain across the stage hid the band from view but opened up at times during the cabaret numbers.

Miriam Slater’s choreography worked well as the action moved around the stage.

My favourite scene was when the scene where the actors played out a typical speed dating scene, firing and answering questions at lightning speed. Well, it is called speed dating for  good reason.

A favourite song was ‘Out of Control’, the song which opened Act 2. It portrayed how the four characters felt their lives getting out of control.

It was one of those plays that involves the audience. This was exemplified towards the end of the play when a couple, who had separated, reunite with a kiss and an audience member called out yay!

What did the play, finally, have to say?! Maybe it comes down to that old adage. We each have to live our own truth and live lives we are comfortable with.

An Acoustic Theatre Company production UGLY LOVE is playing at the Flight Path Theatre, 142 Addison Road Marrickville between the 14th and 23rd July 2022.