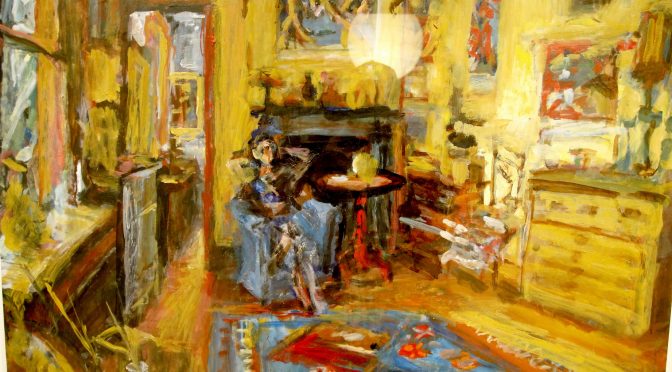 Despite the hipster, trendy image of Byron Bay and the sixties counterculture image of Nimbin there are some lovely artistic gems to be found in the Northern Rivers region.

In this post Sydney Arts Guide highlights two Art Galleries which hold  a special place in the region.

First and foremost is the Tweed Regional Gallery and Margaret Olley Art Centre is located just as you are coming into the town of Murwillumbah.  Its principal attraction is the transitioning of Margaret Olley’s house – dining room, lounge room, kitchen and annexe (yellow room), together with all the contents, including half open painting tubes strewn amongst the bric a brac.

The Gallery was constructed in different phases. Margaret Olley and then local Member Doug Anthony opened the second phase of the Gallery. The third phase involved moving Olley’s possessions from her 48 Duxford Street Paddington residence and this could only take place upon her death.

If you intend to dine or have a beverage at the Gallery’s cafe you may be lucky enough, as we were, to be serenaded by a resident butcher bird.

Margaret Olley’s original wish was to house this installation in Lismore’s Art Gallery as she was born there, but it was decided that the Tweed Regional Gallery with glorious views over Mount Warning would be flood proof and therefore better suited.

Like the Tweed Gallery, the three storey Lismore Regional Gallery is also of recent construction. It forms part of a three sided educational and artistic quadrangle. On one side, the town’s Library faces the Art Gallery, and connecting them both is the Conservatorium Of Music.

When I was visiting much of the Gallery’s space was given over to the curated Dobell Drawing exhibition which Sydney Arts Guide has previously covered.

For me, the most extraordinary part of the Gallery is a pole which indicated the flood levels  that had inundated Lismore not so long ago.

In 2017 the floods were so severe, that only the roof of the gallery was visible above the raging waters. Accordingly, Margaret Olley’s advisers were correct in advising her to install her home to the Tweed Valley Gallery which is high up on a hill.

Both galleries have art gems collected from many talented artists that have migrated to this idyllic part of the world.