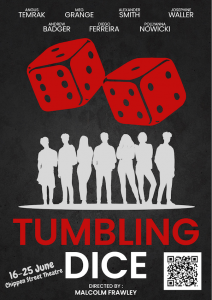 A good friend of mine once gave me important counsel. He said, ‘Life is about one’s ability to manage chaos’. It is a profound truth. All the planning in the world doesn’t escape the fact that we really don’t know what tomorrow will bring.

Malcolm Frawley’s play TUMBLING DICE sees the dice of life fall in very different ways for its characters. The play, set in the nineties, charts the course of seven characters over two main time periods; the last year of school, and  some years after school has finished.

School sees the characters at their most vulnerable. There’s the guy who just can’t seem to fit anywhere and is devastated that he’s hero Kurt Cobain has taken his own life. He sees the school counsellor and confides that he doesn’t see any point in living. We meet up with him years later and he is a muso in a successful rock band.

There’s the  lonely schoolgirl  who fills her emptiness with spurious sexual encounters. We meet up with her years later and she has become a teacher at the same school where she was a student.  It is there that she agonises over ways that she can help obviously troubled students.

There’s the teacher who  falls for a senior girl who flirts with him. Years later they are together despite their disapproving parents. Then he suffers a brain injury and  can barely remember anything and barely functions.

There are a lot of stories in TUMBLING DICE.  As interesting as these stories were I found the play too busy and as a result lost some of its effectiveness. Less characters with more in depth stories would have worked better.

Frawley directed his play well and won good performances from his cast – Angus Tamark, Alexander SWmith, Frego Ferreira, Josie Weller, Meg Grange, Tom Loveluck and Pollyanna Nowicki. Angela Atkinsn lit the stage well and Aaron Noakes provided the edgy  music score. There was no set to speak with actors bringing props on and off the stage.

TUMBLING DICE is the impressive first  production by an exciting new theatre company, At Productions, which is headed by Angus Temrak. He spoke of how it had been one of his dreams, for a  time time, to produce a play and now he can tick it off his list. Hopefully he will mount other productions in the future. Sydney’s independent theatre scene would be the richer for it.